“A Weekend In The Country”

Chic digs upstate (my hosts sure know how to treat a columnist)!

I am thrilled to report that I’m back and well-rested after a much needed holiday weekend!

I took a wee tour of the Hudson Valley, including a visit to FDR’s estate (and presidential library) in Hyde Park. I was feeling so patriotic that I purchased a sweatshirt from the gift shop – and it was nearly 90 degrees! From there I headed north to Columbia County, where I was in residence for a couple days on the New York/Massachusetts border, which couldn’t have been more picturesque! I’ll be heading back up next month to take in the all-male production of A Funny Thing Happened on the Way to the Forum at Williamstown Theatre Festival. Jessica Stone is directing and Tony-nominee Christopher Fitzgerald, is starring (Seth Rudetsky says he has the best calves on Broadway, and I have to agree. If only they handed out a Tony Award for Best Calves!)

Upon my return to New York, I found myself on West 44th Street with a slght buzz of rosé and an hour to kill, so I popped into the Jujamcyn offices to congratulate Jack Viertel on his Encores! production of Anyone Can Whistle, which would surely be poised to win a heap of Tonys if the show had moved to Broadway. Then I was offered a private tour of the St. James Theatre (or, the St. Jimmy, as the kids are now calling it). The theater has such a remarkable history, like my dear friend Carol Channing’s career-making turn in Hello, Dolly! The set of American Idiot is so well designed for that space, it’s a triumph of potschke! It should win the Tony Award, hands down!

Before leaving town, I had the pleasure of attending back-to-back exclusive art world functions. The first was the private viewing party for Joel Grey’s new show of cell phone photography at the Steven Kasher Gallery. The show: exquisite! The crowd: chic! Bernadette Peters, Gay Talese, Ron Rifkin, John Benjamin Hickey, Larry Kramer, Blair Brown, Ross Bleckner, Duane Michels, Donna Murphy, Victor Garber, Jon Robin Baitz, Agnes Gund and Joe Mantello were among those reveling in free wine and Joel’s fabulous prints. I can never pass up the chance to own great artwork, and I’m the proud new owner of a gorgeous print entitled “Venice Sky” that reminds me of my former Coast. From there, I followed Agnes Gund uptown to the annual MoMA Garden Party. I said a quick hello to “Damages” star Glenn Close (I told her, “You’re the scariest bitch on television!” and she looked as flattered as she was stunned). During dinner, I had the entire table discussing Joel’s exhibition at the Kasher Gallery (which was still fresh in my mind, despite the open bar), and a heated debate broke out over cell phone photography and whether or not it’s really “art.” To the doubters at the table, I simply said, “march on down to Kasher and see it for yourself. Then you’ll be singing a different tune!” And that was that! I snuck out just after dinner, and ran into Mayor Bloomberg also making a quick escape.

Speaking of the Mayor, he threw a party for the cast of Hair at Gracie Mansion. Yours truly couldn’t score an invite, as I was informed, in no uncertain terms, that I’m considered a security risk. This all goes back to 1991 when David Dinkins had me banned after I accidently clogged a champagne fountain with my headscarf. Well, why the hell do they call them fountains if you can’t drink directly from them? That’s what I’d like to know! Well, I did have a spy on the inside and who told me that the cast presented Bloomberg with the costume he wore in “Mair” (the hilarious musical spoof, written by Doug Bernstein, that Bloomie performed in back in March with the cast at the Mayor’s Inner Circle Dinner, produced by Doug’s brother—and Hair producer—Jed Bernstein).

Be sure to check out Timmy Blupe’s “On The Couch with…” tomorrow, where we’ll delve deep into the psyche of current Tony nominee Bobby Steggert.

Overheard casting maven and MCC’s Artistic Director Bernie Telsey chatting with Wendy the Snapple Lady about the oil leak in the Gulf over (non-Snapple) iced teas at Joe Allen.

Witnessed Joanna Settle and Stew apparently getting in touch with their inner adolescents with what looked like a rousing game of “Paddycake” on the corner of Broadway and 73rd.

And a hearty congratulations to Philip Rinaldi and Larry Katen for tying the knot on Memorial Day weekend in the very democratic state of CT! 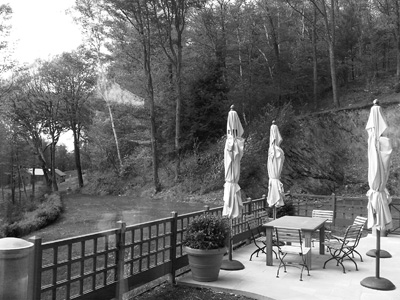