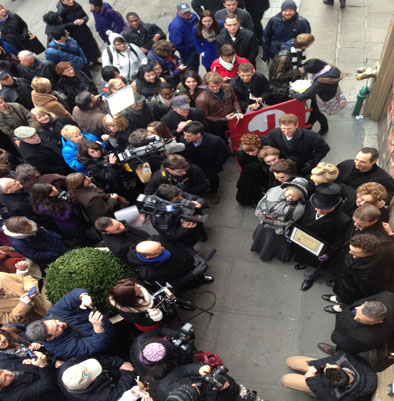 Theater-goers love a good stage death. And the great ones – Evita’s tragic end, Fantine’s pathetic demise, Romeo’s fateful kiss – are not only macabre morsels of entertainment, they are unforgettable moments in theater history. This season, we can add a few more legendary deaths to the roster – eight a night, to be exact. In A Gentleman’s Guide to Love and Murder, the wonderfully versatile Jefferson Mays is killed and killed and killed some more. On Wednesday, history was made, when Mays hit a record 1,000 stage deaths at the Walter Kerr Theater. In this aerial Photo of the Week, Bryce Pinkham and the Gentleman’s Guide cast honor their comically tragic cast mate amidst a slew of media and fans. We like to think the occasion was not to mourn deaths, but to celebrate a thousand lives.