All my shoes are scuffed and my best garments require dry cleaning, meaning only one thing: Broadway shows are coming at us more ferociously than a group of Kari Lake supporters at the Maricopa County Tabulation and Election Center. In recent weeks, I’ve counted myself among the first nighters at The Piano Lesson, Almost Famous, Kimberly Akimbo, The Old Man and The Pool, and &Juliet. I’ve noticed that, in our long theatergoing hiatus, some of my fellow guests are a bit rusty on opening night protocol, so let me take a moment to remind everyone of a few simple ground rules.

Dress up: For crying out loud, you’re attending a Broadway opening, not running errands! Put something special on. Between the Hollywood notion that the most important person in the room is the most underdressed and the Silicon Valley archetype of the disheveled genius (I still contend that Sam Bankman-Fried’s greatest crimes have all been fashion-related), I place most of the blame on the Great State of California for this casual trend. Of course, two years in elastic waistbands didn’t help. Regardless, show some respect and dress to the nines.

Be on time: Opening night curtains are always late, but that doesn’t mean you should be. Get to the theater on time, and use the extra 20 minutes to see and be seen. If you don’t want to mingle with industry types, go later in the run and mingle with tourists.

Eat beforehand: Eating at the party should be avoided at all costs. Trying to juggle a cocktail and a plate of food while glad-handing is a wardrobe malfunction waiting to happen. Fill up before you go and skip the buffet line.

Make your own party: In an effort to keep casts healthy, many shows opting out of traditional post-show parties. Should you find yourself at an opening night performance with nowhere to go afterwards, why not create your own party. Do as Liz and Dick and head to the 2nd floor bar at Sardis’s. Binge on all-you-can-eat pasta at Becco. Or hold court at one of the many theater-inspired, Rockwell Group-designed public spaces at CIVILIAN.

Don’t bother with names: Even if you’re 95% certain you know someone’s name, that 5% chance simply isn’t worth the risk. Pick a gender-neutral term of endearment and use it for everybody. All the greats do it. Harvey uses “Cookie,” Patti uses “Doll,” and I use “Poodle.”

Enough with the red carpet selfies: In the age of social media, the meaning of a step-and-repeat is somewhat blurry. Here’s as helpful hint: if there are professional photographers in front of a step-and-repeat, it is for celebrities and not your Instagram feed. If it’s located in the basement of a theater, near the lavatories, and there’s no one around it — then, by all means, strut your stuff.

Of course, with so many openings comes the inevitability of closings. I will be say farewell to Gabriel Byrne’s beautiful autobiographical solo show, Walking the Ghosts, when it closes this Sunday. He’s a treasure, and Broadway is always richer for his presence. I hope we don’t have to wait long for his return to the boards.

And then there are the shows that never close. The Lion King celebrated its 25th Anniversary last weekend. Director/designer Julie Taymor was on hand, along with lyricist Tim Rice, book writers Roger Allers and Irene Mecchi, choreographer Garth Fagen, and producer Tom Schumacher. The performance featured a special finale that included 25 years worth of Simbas and Nalas as choreographed by L. Steven Taylor, the show’s current Mufasa. After the show, Lebo M. performed in Times Square as confetti cannons blasted the show into the next 25 years of its run.

Spotted: Sophie Von Haselberg, fresh off her acclaimed run in the Old Globe’s What We Talk About When We Talk About Anne Frank, celebrating her birthday in style with a giant table of friends at Strip House.

Heard: Tiffany Trump refused to pay for glam at her wedding, offering instead to allow venders to post photos of the event on social. “Thanks but no thanks”, said at least one well-respected make-up artist.

Caught: Maya Rudolph laughing so hard at something her dining companion showed her on his cell phone, during a recent meal at Perry St, that her Lemon Sage Sidecar came pouring out of her nose. 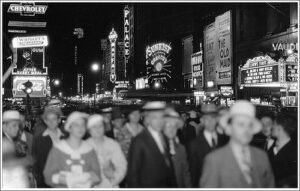