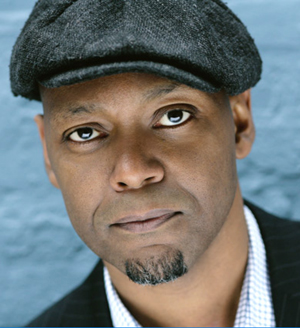 Godfrey L. Simmons, Jr. is helping put a man on the moon nightly over at Theatre Row, where is he currently starring as “Major Taggert” in The Winning Side a new play by James Wallert, presented by Epic Theatre Ensemble.   He is also a Senior Lecturer teaching Acting at Cornell’s Department of Performing and Media Arts and is the Artistic Director of Civic Ensemble, an Ithaca-based theatre company that produces new and overlooked plays by or about women and people of color, re-imagined classics, and community-based plays. With Epic Theatre Ensemble, he has appeared in the world premiere of A More Perfect Union, Widowers’ Houses (which he co-adapted with Ron Russell), Einstein’s Gift, and Measure for Measure. Godfrey has performed Off-Broadway at theatres such as Primary Stages, Playwrights Horizons, Ensemble Studio Theatre, The Working Theatre, and Melting Pot Theatre.  Catch him in The Winning Side through 10/28 and now a moment with him “On The Couch”.

What do you consider to be your best asset?
Sense of style.

What was your proudest moment?
Participating in my son Samuel’s home birth.

What is your favorite drink?
Icewine! So good. So sweet.

What is your favorite food?
Doughnuts.

What is your favorite condiment?
Ketchup.

What is your current obsession?
On Tyranny by Timothy Snyder.

If you could give up one of your vices, what would it be?
Doughnuts.

What is the one professional accomplishment you long for most?
Broadway of course.

What is the one thing you waste too much money on?
Clothes.

What is the one activity you waste too much time doing?
Surfing the net.

What do you consider to be the single greatest threat to your health?
Sugar.

What is the single best trait you inherited or learned from your parents?
Aggressive kindness.

What is the single worst trait you inherited or learned from your parents?
Doing a horrible job keeping up with dear friends and family.

What in the world most thrills you?
Doughnuts.

What current trend in popular culture most irritates you?
The term “woke.”

What was the single most embarrassing moment you’ve ever experienced on the job?
I’m at a regional theater playing Walter Lee Younger in Raisin in the Sun and during a performance we’re doing the scene where Bobo comes to tell me that Willie Harris took the money from our liquor store deal. And he never shows up. We’re vamping onstage when the phone rings. I pick it up and of course I make the caller Bobo—only I’m experiencing a severe case of denial because I KNOW Bobo is coming and phone was just buying time. So I “tell” Bobo to hurry up and HANG UP THE PHONE. Because Bobo is coming. Oy. Well you know what happens—the phone keeps ringing and I keep answering—because HE’S COMING—and the actress playing Mama whispers from backstage “He’s not coming! He’s not in the building!” And so I finally mercifully do the scene on the phone. Oof!

What is your favorite place in the world?
A bookstore.

What is the most important trait you seek in a romantic partner?
Wow. Weirdly…ambition.

What would have to happen to make today the best day of your life?
Seeing my partner and child smile. I’ve had a lot of great days…

What is your personal motto?
No one is coming.