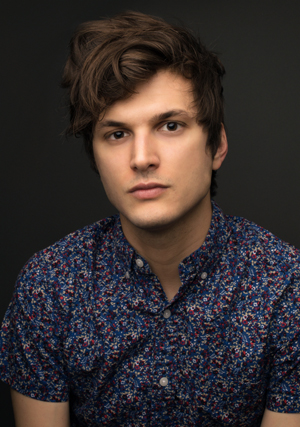 Spring Awakening, Cruel Intentions: The Musical and Dear Evan Hansen… do you see a theme here? Yes, of course, these three shows explore serious topics through the lens of their teenage main characters, but that is not the common thread we’re looking at here. Currently playing ‘Connor Murphy’ eight times a week at the Music Box Theatre in the Grammy and Tony winning Best Musical Dear Evan Hansen, Alex Boniello is no stranger to modern pop scores and brooding on-stage. Boniello made his Broadway debut as the voice of Moritz in Deaf West’s historic revival of Spring Awakening and returned to the Great White Way in May, taking his first bow as the production’s newest Conor Murphy. Want to know what he’s like off stage? Take it away, Alex!

What do you consider to be your best asset?
I think I am easy to work with. It’s simple, but important, and I pride myself on it!

What was your proudest moment?
I’m proud of a lot, but I think opening our revival of “Spring Awakening” on Broadway. It was my Broadway debut, but it was also an incredibly special and rare work of art, and group of people. I felt lucky to be a part of it, while also remaining proud of how hard I worked to get there!

What is your favorite drink?
Honestly, water. But if you mean alcohol, mostly anything with whisky!

What is your favorite food?
Literally anything from this restaurant called NIX near Union Square.

What is your favorite condiment?
It totally depends on the food! But I love a good BBQ sauce, and a good mustard.

What is your current obsession?
Most recently, it was the “Spider-Man” video game. I completely 100% beat that game. It was ridiculous. I couldn’t be pulled away.

If you could give up one of your vices, what would it be?
Sometimes I wish I could just delete all forms of social media.

What is the one professional accomplishment you long for most?
I’d really love to originate a role on Broadway. I’ve been a part of an original cast with the “Spring Awakening” revival, but I wasn’t the first person to ever play that role! That, and to be a series regular on a TV show. To really build the show with a crew, and a cast of people you know seems wonderful.

What is the one thing you waste too much money on?
Cabs/Ubers/Lyfts.

What is the one activity you waste too much time doing?
Instagram and Twitter. Lord, help me.

What do you consider to be the single greatest threat to your health?
My own brain, probably.

What is the single best trait you inherited or learned from your parents?
My persistence from my dad, and my sensitivity from my mom.

What is the single worst trait you inherited or learned from your parents?
Honestly, the above answer totally applies here as well.

What in the world most thrills you?
Unfortunately, nothing gets me quite as hyped as a good professional wrestling match. hahahahaha

What current trend in popular culture most irritates you?
“Stanning” things. It makes me incredibly uncomfortable when people violently love something, and defend it to the DEATH.

What was the single most embarrassing moment you’ve ever experienced on the job?
Completely forgot the words to one of the lines in “Disappear” once. I just made a bunch of weird mouth sounds until I found my place. Let’s hope that never happens again. *Knocks on wood*

What is your favorite place in the world?
I am bad at picking my favorite anything, but I love the Morris Jumel Mansion up in Washington Heights near my apartment. Beautiful, spooky, weird, super cool.

What is the most important trait you seek in a romantic partner?
Sense of humor. Easily.

Do you prefer the company of dogs or cats?
Cats are more my speed, but I love all animals!!!

What would have to happen to make today the best day of your life?
I’m not sure, exactly, but I think it would probably involve there being snow outside, a warm fire inside, video games, my favorite people (and my cat), and absolutely no responsibilities.

What is your personal motto?
I don’t really have one, but I’ve been trying to employ this lately. It’s been working, when I can remember to do it: “Listen more than you speak.”