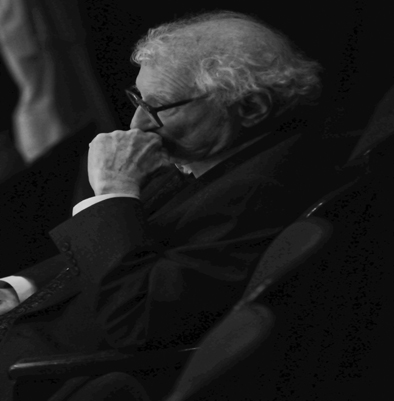 A Genius in Repose

The York Theatre Company, dedicated to the development of new musicals and preserving neglected shows from the past, currently in performance with the Winter 2014 Musicals in Mufti Series, celebrates the works of legendary composer Sheldon Harnick. The series opened in January with the world premiere of the new musical revue, A World to Win, a sampling from his wide-ranging career as a musical theatre writer, followed by Dragons, Malpractice Makes Perfect, Smiling, The Boy Fell Dead and concluding in early March with the 1960’s musical, Tenderloin. We caught the great master at a recent rehearsal for Malpractice Makes Perfect as he observed the latest revisions being incorporated on stage . His hit musical, Fiddler on the Roof, celebrates its 50th Anniversary in September. Ever productive, Sheldon celebrates his 90th birthday on April 30! Happy Birthday, dear friend.