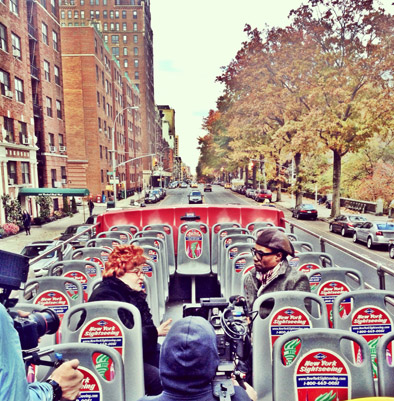 The legendary Sally Jessy Raphael and Tony Award-winner Billy Porter painted the town red this afternoon. Raphael, in her signature red glasses, picked up Mr. Porter at his home in an equally red double-decker bus. The two braved the brisk November day as they rode down Central Park West and interviewed for Raphael’s new talk show airing on LOGO TV. After the interview, it was back to the Hirschfeld Theater for Billy. We’re hoping he inspired Sally to complement those fabulous red glasses with some Kinky Boots-esque red stilettos.