Leave it to New York Magazine’s Jesse Green, whose theatrical distillations are as smooth and multilayered as anything ever bottled in Speyside, to draw the comparison between The Bridges of Madison County and Oklahoma! He writes, “the connection to Rodgers and Hammerstein is not irrelevant. The Bridges of Madison County, though based on an insipid novel, is a very serious musical indeed, both rapturous and moral, with a gorgeous score by Jason Robert Brown. It is also one of the few recent Broadway shows to take up the challenge laid down by the great mid-century works of R&H and their cohort: to tell stories that weld important sociological upheavals to personal conflicts and somehow make them sing.”

Well, Oklahoma! is not just a seminal work in the American musical canon, it also set me on my path. I remember receiving a letter in the mail in early March, 1943. I was in the midst of a tumultuous adolescence, and getting mail of any kind was quite novel. It was from my Uncle Herman — who I barely knew growing up, as he was a confirmed bachelor living a world away in New York City — inviting me to attend the opening night of Oklahoma! with him. Herm was something of a family outcast, but he had heard through the grapevine that I had dreams of the glamorous life, and he must have deemed us kindred spirits.

I begged my dubious parents to let me go, and they eventually decided it would be an eye-opening experience for a young Midwesterner teetering on the edge of adulthood. So I packed my fanciest outfit, and hopped aboard The 20th Century Limited to The Big Apple.

I don’t remember much of the journey, or my first glimpse of the shimmering city, but I do remember the party at Sardi’s. I never knew such elegance existed before that night. I remember seeing Lorenz Hart raising a toast to Richard Rodgers, which struck me as uniquely gentlemanly even at that tender age. I remember Celeste Holm asking me to help her zip up her dress after coming out of the stall in the ladies room. I remember Howard Da Silva and Uncle Herm nudged up against each other in a banquette, speaking in hushed tones. The whole place reeked of gin and cigarette smoke, people were shoving each other to get in the door, the decibel level was deafening … and I was madly in love with all of it.

Just past midnight, a young buck came running into the restaurant with fistfuls full of papers and the room went silent. The reviews were out. Though this tradition no longer exists on Broadway, in the age of smart phones, there is still an addictively tense moment at every opening night when the reviews come in. Well, on that fateful night in 1943, everyone was about to learn that the New York Times had proclaimed Oklahoma! a massive hit. Cheering would ensue. The party would go all night. Broadway would never be the same. And a kid from the Midwest, thanks to an invitation from a long forgotten relative, would find a purpose.

Heard that the newly single Countess LuAnn de Lesseps was flitting about Aspen, having cocktails with designer Tommy Hilfiger and his wife Dee one day, and hitting the slopes with a handsome new gentleman the next. 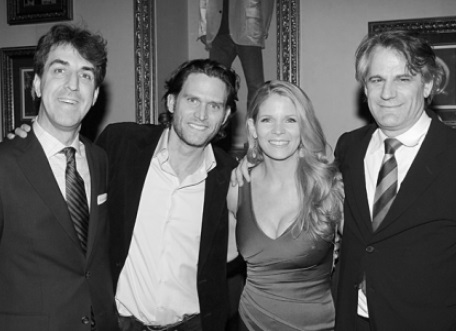