I type this poolside from La Jolla’s storied La Valencia Hotel. This hotel has proven such a draw for stars throughout its 90 year history, that some of them have even worked here! Apparently Pearl Jam front man Eddie Vedder used to work the nighttime security shift, but ended up getting fired for sleeping on the job.

Before winging to San Diego, I had a busy Tuesday night in Manhattan. My first stop was the Sardi’s caricature unveiling for Jefferson Mays and Bryce Pinkham, stars of the Tony winning Best Musical A Gentleman’s Guide to Love and Murder. As loyal readers undoubtedly know, Sardi’s unveilings are my all time favorite theatrical tradition, replete with old school charm and free wine. I was particularly delighted that Mays was being honored – as a true Broadway veteran with a Tony Award on his shelf, I was surprised, frankly, that he had to wait this long. The fact that both he and Pinkham were Tony-nominated together in the same category this year made it an even more fitting tribute. Joey Parnes, the Broadway producer who has officially joined the ranks of “The Greats,” made some lovely and heartfelt remarks, which even included revised lyrics to “I Don’t Understand the Poor” for Jefferson (“I don’t understand his gift…”) and “Poison in My Pocket” for Bryce (“I am standing here with Pinkham in my pocket…”).

Next stop was just a couple doors down 44th Street to the opening night of Side Show. Well, technically it was only first preview, but it sure as hell felt like an opening night. A massive crowd lingered in front of the St. James Theatre, including a phalanx of paparazzi looking for stars. Lynda Carter, Blaine Trump, Frank Langella, David Blaine, and Tommy Tune were amongst the guests who couldn’t wait until the official opening to glimpse the reimagined production. But the true guest of honor was the show’s original Violet, Alice Ripley. How moved she must have been to see her beloved show receive so many massive ovations throughout the evening. The final ovation of the evening, during curtain call, was kicked off when a bunch of “super fans” rushed the stage with bouquets for leading ladies Emily Padgett and Erin Davie. Let me tell you, the great American musical is alive and well and now playing of 44th Street! After the show, back to Sardi’s for a party hosted by Paradigm agent Jack Tantleff, who reps just about everyone involved in the production. Lead producer, Darren Bagert, was literally gleaming with pride (or maybe it was just all the flashbulbs bouncing off his face).
Tidbits from around town, San Diego edition…

Spotted Steve Martin greeting fans outside of The Old Globe, just before an evening performance of the new musical, Bright Star, which he co-wrote with Edie Brickell. 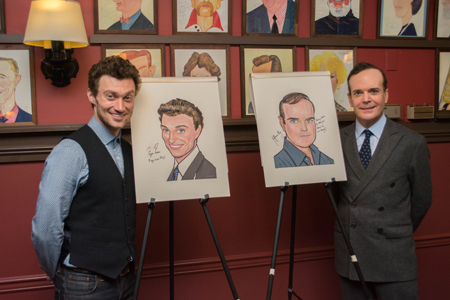