“Another Winter in a Summer Town”

A floral tribute for Ms. Ebersole

I have been waiting for something – anything—to break me out of my post-holidays writer’s block. Well, the enchanting Christine Ebersole was exactly what I needed! I caught her new act at the Café Carlyle last night, and it was the most brilliant, moving, thrilling, and all-around-fabulous evening I’ve had all year. (I know that’s not much of a compliment in mid-January, but ask me again in six months time and I’m bound to have the same answer. What could possibly usurp this divine being?) I don’t want to give a moment of her perfectly mapped set list away, so I won’t go into too many details. I will tell you that the central theme is about getting older. Ironic, given that Ebersole’s blinding beauty seems suspended in time. I turned to “Broadway Beat” host Richie Ridge, seated at the next table, and I asked, “How old is she?” His answer: “Flawless!” Flawless, indeed!

I must admit I’m not on Facebook, but I’ve seen the movie and I know all about it! Well, if I were on it, I would start a campaign for Primary Stages to redub “Studio A,” their legendary rehearsal room, “Studio A.R.” in honor of that national treasure from Buffalo, A.R. Gurney! Gurney’s Black Tie is premiering at Primary Stages on January 25, and I’ll be there on opening night!

August Wilson has found, posthumously, an outspoken ally in Executive Director of the American Theatre Wing, Howard Sherman. Howard drafted a letter to the Waterbury Board of Education defending a public high school’s right to put on a student production of Wilson’s Joe Turner’s Come and Gone. Local school superintendent David Snead tried to put the kibosh on the production due to Wilson’s use of “the N word.” Howard’s interest in the matter goes deeper than his role at the ATW; he is also a native of Connecticut and spent much of his career there. Well, his passionate response to the controversy paid off: last night the Board voted to allow the production. The show must go on!

Overheard ultimate showman David Bowie at the intermission of SPIDER-MAN Turn Off The Dark discussing the show’s flying technology in great detail with the woman sitting next to him.

Ran into the legendary Liz Smith at my favorite Mexican restaurant, but she made me promise not to reveal the name as she’s a regular and doesn’t want it to get too popular.

Saw Leslie Jordan having coffee with two hunky gentleman companions at Dean & Deluca, when one of the companions spilled a scalding hot cup of coffee right onto the other’s lap. Lots of shrieking and carrying on ensued, before the spilled-upon ran right out the door in a huff! 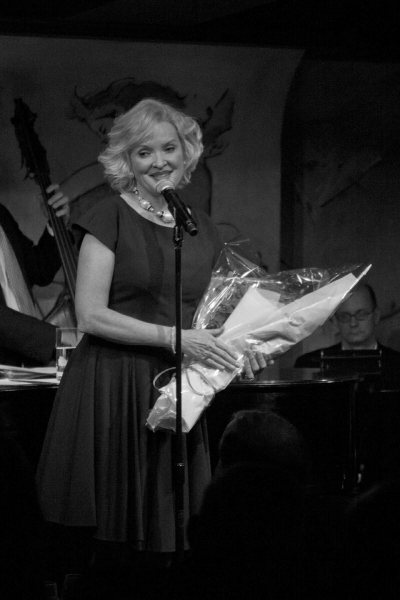