Well, I overdid it again at The American Theatre Wing Gala. Something about the combination of black tie attire, top level entertainment, and open bar seems to be a recipe for disaster for me. This is what I’ve managed to piece together: the great Hal Prince was honored by a slew of stars including Glenn Close, Santino Fontana, Sierra Boggess, Emily Skinner, Richard Kind, LaChanze, and the great Angela Lansbury, who presented Hal with his honor. The Wing’s Executive Director Heather Hitchens opened the evening by saying we were all there to “honor the Prince of Broadway” at which point Fontana, sporting his Prince Charming crown, popped on stage to accept his accolades. When Hitchens explained that the Prince in question was actually Hal Prince, Fontana launched into a three-minute mash-up of music from the Prince cannon. It was a hoot. It was a hit. It was a great way to kick off the evening. The rest of the night is a blur, but I know I spotted Sir Patrick Stewart, Alan Cumming, Kim Cattrall, Star Jones, Tyne Daly, Oliver Platt, Shuler Hensley, Judy Kaye, Liz Claman, Pia Lindstrom, Jo Sullivan Loesser, and Sir Howard Stringer among the glittery crowd. I also found out that the gala raised around $700,000, which is an all-time record for the Wing. I just hope my champagne consumption didn’t put them in the red!

I was much more demure at the private meet and greet for A Gentleman’s Guide to Love and Murder, held at P.J. Clarke’s on Wednesday. I was the only press person in the room (another Scoopsclusive!), and I planned on just being a fly on the wall so I could get a sense of how this remarkably talented company interacts with each other (and perhaps overhear a few juicy tidbits). Well, no such luck! Producer Joey Parnes instructed everyone that it was their responsibility to meet every single person in the room. The next thing I knew I was in deep conversation with everyone from cast members to producers to designers to creators! Alas, no juicy tidbits were revealed, but I made about fifty new friends. I can’t wait to see my new besties onstage when they start previews on October 22.

Spotted newly crowned Miss America, Nina Davaluri, getting a round of applause as she stepped into Bond 45 for lunch. She had pasta fagioli (a beauty queen unafraid of carbs!) and took pictures with all the waiters, before departing.

Overheard recently departed SPIDER-MAN Turn Off The Dark star Reeve Carney telling a friend that he was “so depressed” after his final performance. 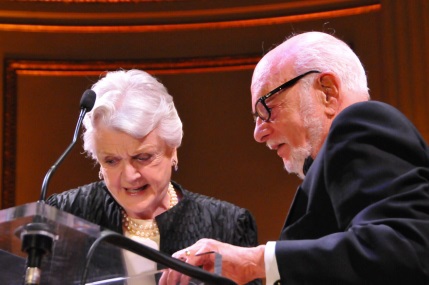