“BEFORE I GAZE AT YOU”

If you do what I do for a living, you’re likely to receive more invitations than you know what to do with. If each week had a dozen nights, I still wouldn’t have the time to make appearances at all the various openings, events, parties, conferences, performances, shindigs, soirées, weddings, and bar mitzvahs that I get asked to attend. But when the Royal Family requests your presence at the Palace, you put everything else aside and go.

And, so, on Thursday afternoon I headed up to Lotte New York Palace on Madison Avenue to meet the cast of DIANA: A True Musical Story. (What Palace and what Royal Family did you think I meant?) This kind of event – formally: a “sneak preview,” informally: a “dog and pony show” – is not unusual, but something about the subject matter and the surroundings instilled a sense of awe in even the most jaded in the crowd of invited attendees.

The event was hosted by none other than Imogen Lloyd-Webber, scion of Lord Andrew and television’s reigning royal expert. The room was bathed in white roses, the favorite of the Princess of Wales herself. The refreshments were, appropriately, of the high tea persuasion. Producer extraordinaire Beth Williams introduced the presentation.

Jeanna de Waal, who somehow manages to embody Diana with all of the grace and vulnerability required for the impossible task, performed a number called “Underestimated” that evoked a handful of gasps and one very audible sob from the audience. Just to add a little extra sizzle, composer (and Bon Jovi member) David Bryan accompanied de Waal on the piano.

After knocking out somewhere in the ballpark of 30 interviews, Kaye kicked off her shoes and relaxed. I asked her if she was already tired of the publicity. “Honey, we’ve got a show to sell,” she shot back. And before I knew it, she was up and doing one more one-on-one. 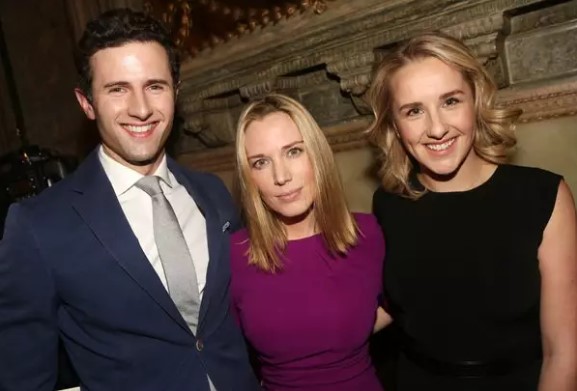