“Better with a Man”

Though a Midwesterner by birth, I’ve always been something of an anglophile, so imagine my delight when I received an invitation to have high tea at the Norwood Club with the cast of A Gentleman’s Guide to Love and Murder! The Norwood Club is a downtown club for artsy types and the people who love them set in an rambling 19th century townhouse. It’s homey and vaguely Edwardian-feeling, with a little edge. Very much my (pardon the pun) cup of tea. The event took place upstairs in the club’s screening room. The place was jampacked with media. Someone kindly gave up his seat for me (one of the few benefits of old age), but I saw my friends Michael Musto and Mark Kennedy standing in the back. Director Darko Tresjnak welcomed us and introduced a couple numbers. First up, co-stars Jefferson Mays and Bryce Pinkham performed the double (and occasionally triple) entrendre-laden song “Better With a Man.” Then Pinkham, alongside his two leading ladies Lauren Worsham and Lisa O’Hare, performed “I’ve Decided to Marry You” – staged as a classical slamming-doors farce. I was doubled over in laughter throughout. Even the occasionally cranky Broadway shuttersman Bruce Glikas was giggling like a school girl!

The plot is simple: a penniless and charming young Brit finds out he’s a relative of the mega-wealthy D’Ysquith clan. In fact, he’s ninth in line to become the next Earl of Highhurst. So what’s an ambitious young heir to do? He sets out to (GASP!) murder the eight relatives standing between him and that title, while juggling the affections of two lovely ladies. Simple, right? The execution, however, is not so simple. Tony® winner Mays plays all eight doomed members of the D’Ysquith clan. How can one man pull off so many quick changes and slow deaths in a single evening? You’ll have to come to the Walter Kerr Theatre starting October 22 to find out!

After the performances, tea was served. I opted for Earl Grey with a splash of milk, a scone, and a cucumber sandwich. I spotted castmember Jane Carr very much in her English element, sipping her own cup of tea (she opted for Darjeeling). We mingled about the room, sipping and munching, until the cast reappeared (this time the full company, and out of costume) to pose for photos. All assembled, under the harsh glare of the flashbulbs, this company’s chemistry was instantly apparent. The co-creators, Robert Freedman and
Steven Lutvak, posed gamely with the principals, looking excited and a bit bemused that their pet project made it all the way from raves in Hartford to raves in San Diego to the Great White Way. I have a feeling this is only the beginning of their excitement and bemusement!

Ran into Madonna at the Walter Reed Theatre at Lincoln Center for the NY Premiere of Steve McQueen’s breathtaking new film, 12 Years a Slave. “Madonna, New York misses you!” I yelled. “I live here, you ass,” she replied. 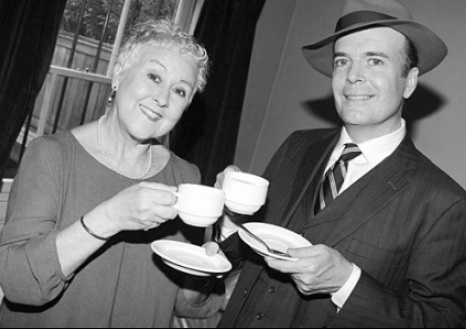