Let’s keep this just between us, shall we? I broke the rules and snuck into a new Broadway musical smack dab in the middle of previews, and now I’m ignoring the holy press embargo by writing about it ahead of opening. The show? Escape to Margaritville. The reason: I was thirsty. Just kidding. The reason I didn’t want to wait for press performances – when the house is stacked to the rafters with critics – is that I wanted to see how “the Jimmy Buffett musical” plays to its usual crowd. I had a hunch, you see, that its “usual crowd” would differ from a “traditional theatergoing audience.” My hunch turned out to be not entirely accurate, as I did see plenty of “avids” — a term for tri-staters who see lots of theater and tend to be the first wave (or, in tech terms, the early adopters) of any new show. But sprinkled liberally amongst the liberal elite were, indeed, plenty of folks who definitely weren’t from around here.
I will admit that, in this current political climate, the contrast between these two groups was jarringly apparent. As I moved past the thatched roof merch stands and the tiki-style lobby bar (which had lines longer than the ladies’ room during intermission of Beautiful – The Carole King Musical and Waitress combined), I found myself in a sea of Hawaiian shirts, cargo pants, and adjustable baseball caps. This was decidedly not my tribe.

When the show started, a row of crispy blondes in colorful tops in front of me gleefully sang along to the very familiar (at least to them) songs. I not-so-gleefully judged them from my perch, my head throbbing with the kind of MSNBC-informed cultural bias that has been a warm blanket to me these past thirteen months.
Then something astonishing happened. As the taut and joyous plot spun forward, and the melodies started to become familiar even to my relatively untrained ear, the division between “us” and “them” started to melt like a frozen cocktail under a mid-day tropical sun. Before the genuinely thrilling first act finale, there was a palpable kinship forming amongst audience members of all stripes. We laughed at the same punch lines, rooted for the same characters, and swayed to the same tunes.

In 2018, when Congress is inert with gross partisanship and each culture war feels like it might break out into civil war, two of the most potent and enduring brands in popular culture, Jimmy Buffett and Broadway, have joined forces for the greater good of humanity. If this all sounds a bit lofty for a musical comedy named after a tequila-based libation, turn off cable news and buy yourself a ticket. Just go. And tell me you don’t walk out of the Marquis Theatre feeling more hopeful about the state of our democracy. Not a little more hopeful. A lot more hopeful.
To quote the Beach Bard himself, “It’s those changes in latitudes, changes in attitudes– nothing remains quite the same. With all of our running and all of our cunning, if we couldn’t laugh we’d all go insane.”
Oh, and the drinks were damn tasty too!

As always, a toast of something frozen and salt-rimmed to you and yours!
Kisses, 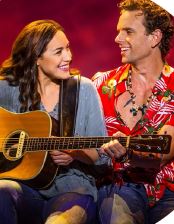