“Changing My Major (to Joan)”

I find the radio the most unvalued broadcast medium — a skilled radio announcer’s ability to hold an audience captive without the benefit of any visuals is such an astonishing art form. So it’s no surprise that I’m an avid listener to the radio’s long-reining day-time doyenne, Joan Hamburg. I caught her interview on Sunday with the great Jefferson Mays, the much lauded star of A Gentleman’s Guide to Love and Murder. What an insightful chat! If you want to understand what makes a great actor tick, you must tune in! Mr. Mays revealed that his infatuation with character work began as a child, when his parents used to perform dramatic readings of novels around the dinner table. (A far cry from my childhood memories of listening to my parents scream accusations and obscenities at each other around the dinner table.) He recalls watching his mother read Dickens, her voice and face transforming as she took on different characters. It’s no wonder he’s decided to take on a role that required him to transform into eight wildly different roles over the course of each evening.

And speaking of reining queens of the New York media, Cindy Adams had me rolling this morning pointing out one of the great ironies of the modern age: “Today everything’s quick. Fast Forward. Rapid transit. Jiffy Lube. Minute rice. Instant coffee. Robots clean houses. The train’s an Acela. The swimsuit’s a Speedo. … Only one thing’s gone the other direction.

Modern day motion pictures. Who can sit through eight-hour movies today? My patience won’t last that long. Neither will my bladder.” Well my bladder barely held up during while guffawing my way though her rant! I wonder what Cindy thinks of this week’s big theatrical news that the much lauded Public Theater production of Here Lies Love is being remounted. The show tells the story of Cindy’s dear friend Imelda Marcos. The show’s initial run at the Public became a celebrity magnet, attracting everyone from Sting to Chelsea Clinton. The one star who didn’t attend? Cindy Adams! Well, considering that she is New York’s greatest living link to Marcos, I’m dying to know if she’ll make it down this time around. Cindy, whatta ya say?

Ran into Mary Beth Peil, who I’ve adored in everything she’s ever done (most recently “The Good Wife”), shopping for scarves at Barney’s. Me: “That’s a nice color on you.” Her: “Who cares about the color? I’m just trying to stay warm. The base of the neck is the most vulnerable part, you know.” I’m calling her Dr. Peil from now on. 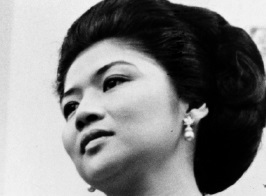