One day it’s hot and humid, the next it’s brisk and autumnal. That can only mean one thing: the season has begun.

On Wednesday, I was honored to be a guest at a private dinner at the Steven Kasher Gallery celebrating Joel Grey’s latest exhibition of photography, called The Billboard Papers. Why The Billboard Papers? Well, when Joel injured his foot during Anything Goes, he found himself with some free time on his hands. He started photographing billboards on the sides of buildings around New York City – you know, those exterior city walls where advertising posters have been placed, and then worn away and replaced with other posters, leaving a kind of collage of contemporary culture. I pass such scenes every day but never notice. Not Joel. He notices and captures them for the rest of us to notice. The work is sublime, and getting to view it against those white, white walls of the Steven Kasher Gallery alongside an intimate but chi-chi crowd that included the likes of Bernadette Peters, Bebe Neuwirth, Agnes Gund, Alice Tisch, Thomas Schumacher and Matthew White, Blair Brown, Pat and Gene Wexler, and of course the man of the hour, the Emcee himself, made for a memorable evening. The prints start at $5,000 (and to my mind worth every penny, but there is a stunning book out by the same name by Pointed Leaf Press – a numbered limited edition of just 500 copies – for those who want to live with the work for considerably less coin) and I have my eye on three … now I just need $15k and some wall space.

Before the delish sit-down dinner, I roamed the cocktail hour. Sam Shahid, who designed the book, was marveling over his Aperol Spritz. The cocktail matched Bernadette’s signature red locks, which were draped over that age-defying frame of hers, which itself was draped (or, rather, wrapped) in a provocatively-cut silk dress. The men in the room, and perhaps even a few ladies, couldn’t keep their eyes off of her. Bebe, also defying age, was decidedly more conservative, in a black frock with a white collar. The always natty Schumacher and White wore perfectly tailored suits in shades of blue. Page Six’s Ian Mohr had on the most magnificent Jack Purcells with the Hudson Bay stripes, and his glowing wife, Wall Street Journal Magazine’s Elisa Lipsky-Karasz was dressed in the chicest little black dress I’ve ever seen on a pregnant lady. (Would that they made maternity clothes as glam when my social circle was still fertile back in the 1970’s!) What I’m trying to say is: the room was filled with works of art, not all of which hung on those white white walls. And, speaking of colors, be sure to tune into the “Today Show” on Monday, when television’s longest running morning show will unveil its new state-of-the-art studio. The new studio is orange, and I’m told to expect lots of pumpkin-colored surprises throughout the broadcast.

Saw Karen Ziemba swinging around a lamppost on the Upper West Side.

Spotted A Gentleman’s Guide to Love and Murder co-creators, Steven Lutvak and Robert Freedman, having a multi-hour lunch at Joe Allen. In my experience, usually multi-hour lunches at Joe Allen include one or three martinis, but I saw nothing but iced tea and water at the table of these two highly professional mega-talents.

Let me close with a plea to the public: I’ve been trying to score an invitation to the American Theatre Wing Gala on Monday night, honoring the great Hal Prince, but word on the street is that it’s completely sold out. If anyone has an extra seat at their table for this desperate old reporter, please let me know! Hal and I go back, and I’m loath to miss it. 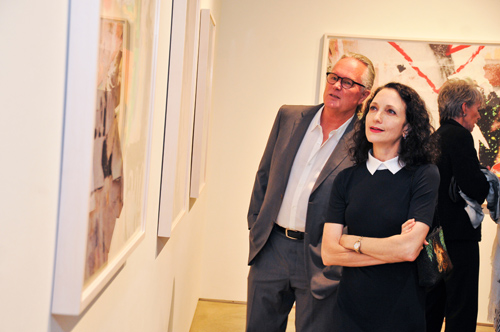