“Come Fly With Me”

Robin and the 7 Hoods stars Will Chase and Amy Spanger, with a bevy of beauties.

What a thrill to be back in action after my prolonged, much-needed, vacay! There is simply no better place to get away from it all than Palm Springs in the dead of summer low season. It puts the “desert” in deserted! I did manage to round up a few sparklies for a little cocktail party at my hotel. Joanne Carson, Barbara Rush, Jason Mraz, Skip E. Lowe, David Galligan, Carole Cook and Donna Mills were all on hand for what turned out to be a booze-soaked festival of showbiz tales. It was such a hoot! After that, I didn’t see one familiar face. But just roaming around that storied town brings back many fond memories of some very familiar faces: Frank, Dean, Goldie, Suzanne, Liz, Elvis, and, dearest to my heart, Lee (who was better known to the world as Liberace).

In 1972, Lee and I were attending a pool party at the over-the-top manse of top Palm Springs realtor Walter “Springy” Waterfast. Well, Lee didn’t approve of the rather outdated swimsuit I was wearing under my caftan so he sent his beloved driver, Prawn, to go from shop to shop picking up the skimpiest swimsuits he could get his hands on. When Prawn got back to the house with a huge selection, Lee still wasn’t satisfied with any of the choices. He immediately called up his own personal costume designer and before I knew it a bespoke (teeny-tiny) suit covered in disco-ball mirrors was being helicoptered in from Los Angeles. Well, by the time the suit arrived the party was over — and thank heavens it was! I would have never mustered the courage to waltz into Springy’s palace wearing that awful creation! But I still have it to this day, and when I’m in a particularly wistful mood, I’ll put on Lee’s recording of “I’ll Be Seeing You” and try to squeeze myself into it.

Of course, the king of Palm Springs was Frank Sinatra, and his spectacular modernist home there still stands to this day. It was the locale of many a legendary Rat Pack soirees and much, equally legendary, bad behavior. While I never scored an invite to the Chairman’s house while he was living, I did get to take a peek around while I was in town, and it is a perfect reminder of just how sleek and sultry that era really was.

And, speaking of that sleek and sultry era, I took a jaunt down to San Diego to catch the opening night performance of Robin and the 7 Hoods at the Old Globe. Robin and the 7 Hoods was a rather forgettable 1964 Rat Pack film that has been transformed into a truly unforgettable musical featuring a soaring score of familiar Sammy Cahn and Jimmy Van Heusen tunes. Each musical number is staged (and orchestrated) to full effect, and the effect is simply buzz-inducing (as was the all the wine at the after party).

At said after party, I spotted Robin Givens looking younger and sexier than ever in a short black dress and killer heels. She was humming (and snapping along to) “My Kind of Town (Chicago Is),” which serves as the show’s opening number, as she waited for a friend to return with a couple drinks. It seemed everyone at the party was humming (and snapping along to) one of the fabulous songs from the show (thanks, in no small measure, to the bang-up job of Musical Supervisor John McDaniel)! Impresario Barry Brown was chatting gamely, and keeping an eye on the proceedings. Producer (and the owner of my favorite Beverly Hills eatery) Dennis Mastro was huddled in a corner with co-producer Dennis Farina. I also spotted top Hollywood Power Couple Sherry Lansing and William Friedkin. The real toast of the evening, though, was the lovely Tita Cahn, Sammy’s gorgeous and kindhearted widow.

The next morning I awoke in my seaside suite at La Valencia in La Jolla (truly one of the great hotels in the world, and the only place to stay whilst in that part of the world) with a throbbing headache. As I was checking out, none other than New York Post star theater columnist (and the most feared man on Broadway), Michael Riedel, was checking in. He told me all about a one-night jaunt he had recently taken to the Rosarito Beach Hotel, just about 30 minutes south of Tijuana. It sounded like the perfect cure for my headache. I rented a chic little convertible and booked the Presidential Suite, the room Liz and Dick used to favor on their discrete jaunts south-of-the-border. I arrived just in time for a boozy lobster dinner in Puerto Nuevo, and then back to the hotel for karaoke, where I joined a Mexican bachelorette party. By the time I was slurring my way through a Spanish-language version of “Don’t Go Breaking My Heart,” my headache was completely cured.

Knowing I couldn’t come right back to reality after landing in New York, I got myself booked into the divine Empire Suite at the Carlyle for just one special evening. The suite is two stories, with magnificent park views from almost every room, and has the most bathrooms per square foot of any place I’ve ever seen (five in total). It was glamour to the max, and I shared it with a handful of special friends including Liz Smith, Jorge Vargas, Rick Elice, and Elaine Stritch (who lives just a few floors down, of course). It was a crowd befitting such a room, and a room befitting such a crowd!

And, finally, it is with great joy and pleasure that I congratulate my dear friend Cindy Adams, who will be resuming her column on September 7!

As always, a toast of something sparkling (or salt-rimmed) to you and yours! 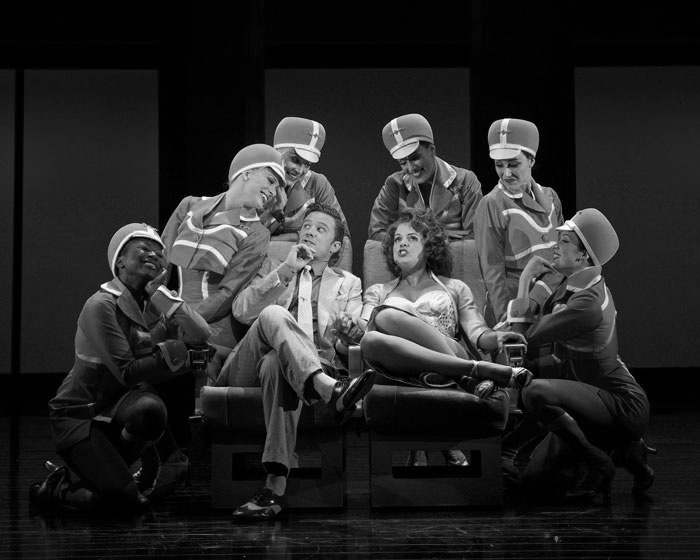