Ladies and gents,
Broadway shows can either hold you captive (see: Joe Allen’s brick walls) or utterly captivate, and energize, and sometimes (usually after a few cocktails) transcend you into a unique, almost holy sort of bliss. The first time I can vividly recall feeling that highest form of entertainment-induced bliss was in 1964, when I saw my great friend Carol Channing in the role that made her legend – Dolly Gallagher Levi in Jerry Herman and Michael Stewart’s Hello, Dolly! I remember sitting in that darkened house, my face still plump with collagen, completely overwhelmed by the singular power of the American musical at its brassy best. It is the most intoxicating drug I’ve known, and I’ve been chasing that high ever since. Well, all these years later, there’s a new dealer coming to town, and though doses are in famously short supply, I’ve been determined to get my hands on that sweet, sweet stuff. So, when word reached my inbox via press release that Bette Midler and Co. will be doing a couple additional performances of Hello, Dolly! and tickets were available in person at the Shubert Theatre box office, you bet your sweet tuckus I was standing in a line on the street outside the Shubert Theatre on Thursday by 6:00 a.m.—a whole four hours before the first customers would be served. (It’s also worth noting that I was the twentyseventh person in line that morning. The folks at the very front were there at 4:00 a.m. This drug is in demand.) Well, I snapped up as many orchestra seats as the kindly cashier would sell me! One ticket for me, a second for a lucky yetto-
be-determined companion (preferably with a strong jawline and six-pack abs), one for my masseur, and the rest for a group of aspiring young gossip columnists I mentor in my free time. It was a morning I won’t soon forget, standing in my furs with droves of fellow Dolly! super fans, singing the score with full-throated fervor – collectively anticipating the moment we get to see Bette Midler make her grand entrance. And finally – finally!—we’ll get our fix.

Clearly, a rousing musical can make you do things you otherwise wouldn’t (e.g. stand on the street for hours in the middle of January; spend $20 on a watery Jack & Coke; venture to midtown on a Saturday afternoon; etc.) Well I, as a rule, don’t dance. I used to dance. I used to love to dance. But losing one’s balance doing The Hustle upstairs at Studio 54, tumbling over the balcony, and landing on a non-at-all-amused Divine will change one’s attitude towards cutting a rug. Well, cut to 2014, and my first viewing of Beautiful – The Carole King Musical. Once those familiar tunes got cooking, I was on my feet dancing in the aisles with abandon. Back then, Jessie Mueller was uncanny in her portrayal and now, I hear Chilina Kennedy is carrying the torch with Olympic prowess. The show just celebrated its third anniversary with a post-show celebration centered around a giant, custom made Rice Crispy Treat. (Add “Eating a giant Rice Crispy Treat” to the list of foolish things a rousing musical might make you do.)

Saw Helen Mirren and Jeremy Irons at what must have been “English Actors Night” of The Humans, which ends its Tony-winning, year-long run on Broadway this weekend.

Overheard Tovah Feldshuh talking about traveling down to DC on January 21 for the Women’s March. 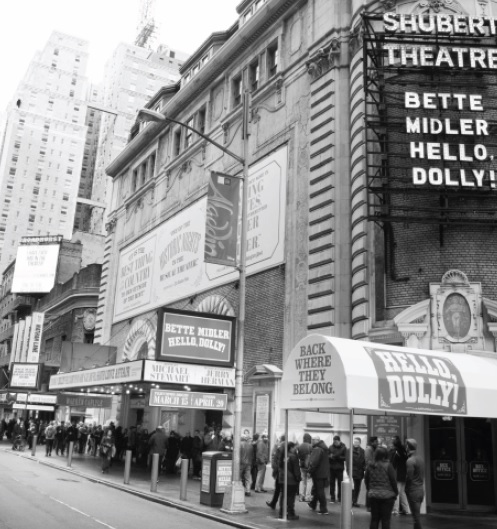