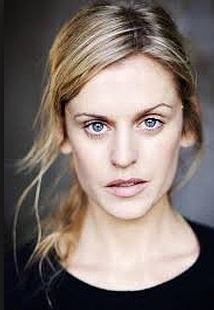 Most of New York was introduced to Denise Gough through her perplexingly brilliant performance in last season’s People,
Places and Things at St. Ann’s Warehouse. Little did the metropolis know, Denise was already a staple of the stage in West
End productions like Adler and Gibb, Desire Under the Elms and The Duchess of Malfi – a play in which she also starred when
it was presented as a television movie in 2015. Now, Ms. Gough takes on one of the more challenging roles of the American
theatre: Harper in the Broadway revival of Tony Kushner’s Angels in America. She was the talk of the town, now she’s the
toast of it, and to have Denise Gough On the Couch this week is making us soar into the highest principalities!

What do you consider to be your best asset?
My work ethic.

What was your proudest moment?
Transferring People Places and Things to the West End and then New York. And
any day I witness my nephew put an outfit together.

What is your favorite drink?
Sparkling water with fresh lime.

What is your favorite food?
Soft shell crab tempura with truffle mayonnaise from OKKO in London.

What is your favorite condiment?
Truffle mayonnaise.

What is your current obsession?
Equal Representation for Actresses.

If you could give up one of your vices, what would it be?
Watching TV before bed.

What is the one professional accomplishment you long for most?
A Broadway run of People, Places and Things followed by a great film of it. Then I’ll be
finished with THE DAMN THING!

What is the one thing you waste too much money on?
Food I intend to cook and then don’t.

What is the one activity you waste too much time doing?
Watching box sets.

What do you consider to be the single greatest threat to your health?
Living in Manhattan- it’s relentless.

What is the single best trait you inherited or learned from your parents?
My work ethic.

What is the single worst trait you inherited or learned from your parents?
Catholic guilt.

What in the world most thrills you?
Being on stage.

What current trend in popular culture most irritates you?
I get freaked out by social media. Strangers commenting on each other’s lives creeps me out. I tried it and felt unbearably
exposed.

What was the single most embarrassing moment you’ve ever experienced on the job?
Nah. I’m not going public with that.

What is your favorite place in the world?
The stage.

What is the most important trait you seek in a romantic partner?
That they know who they are.

Do you prefer the company of dogs or cats?
As long as the dogs don’t lick me on the mouth or leave hair everywhere then they can hang out.

What would have to happen to make today the best day of your life?
Days are pretty great right now.