“DOES ANYBODY WANNA BUY A MEMORY?”

There was a time, during the height of my party days, when I kept envisioning Jim Nabors everywhere — he’d appear in my kitchen, my bathtub, even floating in my swimming pool. I came to think of him as something of an “imaginary icon” and, in many ways, he brought me great comfort during what was a pretty dark time in my life. Usually, he kept to himself, but occasionally we’d have deep conversations about my woes or his. (Later, and only after my weekly grocery bill had nearly tripled, I finally realized that he had actually moved in with me after a drunken run-in at Mr. Chow during which I offered him my spare bedroom while his Malibu spread was under construction.) Needless to say, when I first heard the premise of C.A. Johnson’s new play, All the Natalie Portmans, in which a young girl in the midst of personal crisis is repeatedly visited by her Hollywood idol, Natalie Portman, it felt all too familiar.

Lucky me, I got to attend MCC Theater’s opening night celebration of this wildly inventive piece of drama. I was bowled over by the play, and especially by its star, newcomer Kara Young. What a find! Those MCC boys continue to prove Off Broadway’s enduring vitality as a breeding ground for daring new work. I told them as much, and they seemed genuinely touched by my kind words. I love theater machers who can still feel! My suggestion to you, dear readers: don’t miss this humdinger of a play!

And as long as you’re venturing Off Broadway, you’re going to want to stop by The Flea to check out Taylor Mac’s new piece, The Fre. I hear it’s either a mad and brilliant exploration of the current political landscape, or simply a wildly amusing play about a group of anti-intellectuals stuck in a swamp. You decide!

Speaking of politics, if you’re anything like me, you miss the smell of cigarette smoke when you’re having a night out on the town. (And I mean that as no swipe at Mayor Bloomberg. I’m just being me.) Well, Detroit doesn’t seem to have any of the anti-smoking policies that have swept much of the rest of the country. So Ain’t Too Proud’s tour launch event at Motorcity’s historic hotspot, Roostertail, was novel not just for delivering Otis Williams live and in person, but also because half of the attendees were sucking on Pall Malls. Talk about “temptations.” Back in the day, The Temps had played Roostertail, but Mr. Williams told me he hadn’t stepped foot in the hall since the 1960s. The cast was on hand to perform some of the old hits, and they just about blew the roof off the place (which, come to think of it, would have helped with the ventilation).

Spotted Spike Lee getting a hero’s welcome at Madison Square Garden, where he acted as a kind of goodwill ambassador for the history-making performance of To Kill a Mockingbird, put on for more than 18,000 of New York’s public school students.

Overheard Katie Lee at Whole Foods discussing the best kinds of canned soups to stock up on to prepare for a coronavirus outbreak.

Saw Russell Tovey, about to begin performances in the Joe Mantello-helmed Who’s Afraid of Virginia Woolf, taking a phone call in gym clothes outside of Equinox. 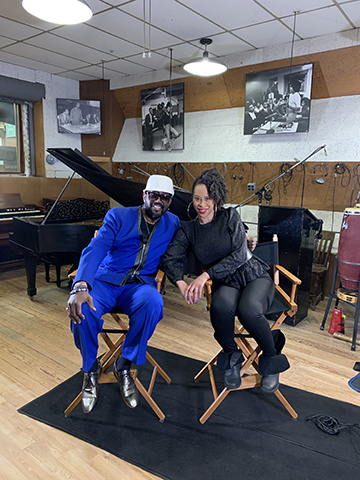