New Yorkers know that there’s real estate and then there’s real estate. Well, I spent Thursday morning in an apartment that can only be described as surreal estate. No, I’m not blowing my Christmas bonus on a new pad. I was at the press meet and greet for the Terrence McNally‘s new Broadway play, Mothers and Sons. The play takes place at a sprawling Central Park West abode with killer views. So where else to hold the press event than a sprawling Central Park West abode with killer views? Myself and the rest of the theatrical press corps were summoned to the San Remo.

The San Remo, for those of you poor souls who aren’t familiar, has been home to a who’s who of superstars including Rita Hayworth, Steve Martin, Glenn Close, Dustin Hoffman, Bruce Willis, Diane Keaton, Mary Tyler Moore, Demi Moore, Bono, and Steven Spielberg. (It’s also home to one of my all time favorite theater couples: Scott Rudin and John Barlow.)

Despite its status as one of the top buildings in New York, it got off to a rather bumpy start. Designed by the great Emery Roth, construction began mere moments before the stock market crash of 1929. Throughout the depression, nearly a third of the apartments sat vacant and the building eventually fell into bankruptcy. Well, you might have heard, but since the depression the New York real estate market has picked up some, and I can assure you that this urban palace is no longer in the red.

So, the apartment itself: a 6,000 square foot simplex on the tippy top of the North Tower. It’s two apartments, actually, combined into one, with a layout that would accommodate six bedrooms, though currently configured with three. The views of the park and skyline are nothing short of jawdropping. Who is the lucky SOB who lives in such grandeur you ask? Well, dear readers, I’d tell you but the man hosted the event in secrecy while his disapproving wife was out of town so my lips are sealed. (I should mention that the San Remo’s doormen are famous for their discretion; Warren Beatty once dated Mary Tyler Moore in the South Tower and Diane Keaton in the North Tower at the same time.)

In attendance, the ridiculously talented cast: Tyne Daly, Frederick Weller, Bobby Steggert, and youngster Grayson Taylor; the director: Sheryl Kaller; the scenic designer: John Lee Beatty; and the playwright: Mr. McNally. This play makes a staggering twenty Broadway productions for the legendary scribe. McNally’s career aside, the play is historically significant for another reason: it is the first time a legally married gay couple have been depicted on a Broadway stage. McNally is still breaking ground six decades into his remarkable career.

On Thursday morning, even one of the world’s most successful writers seemed genuinely excited to be in such gracious surroundings.

Overheard Michael Riedel kibitzing about the Broadway season with A Gentleman’s Guide to Love and Murder composer Steven Lutvak. 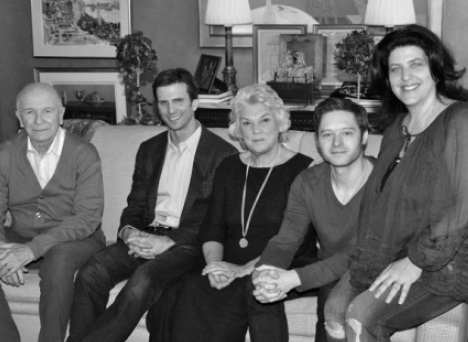