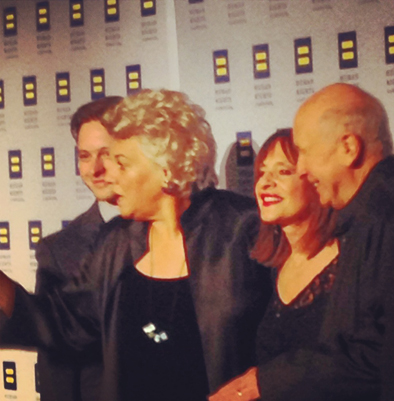 Mothers and Sons might be opening on Broadway next month, but Terrence McNally’s work of staggering emotion is much more than just a play. Above all, this moving, oftentimes funny piece of theatre is a statement on acceptance, equality and the many faces of love in our contemporary society. With this in mind, it is only appropriate that McNally and Mothers and Sons’ stars Tyne Daly and Bobby Steggert were in attendance at the Human Right Campaign (HRC) Gala honoring LGBT activist and theatrical luminary Patti LuPone. In this Photo of the Week, Terrence, Tyne and Bobby stand with the legendary honoree at the Waldorf Astoria. Their presence at the event this past Saturday night served to highlight the evening’s ever-important theme. At dinner, guest Eric Holder, United States Attorney General, announced the federal government’s recognition of same-sex marriage in our country – a historic moment and a worthy reminder of how essential McNally’s message seems to be.