“Give a Man Enough Rope”

I don’t like this column to be polarizing and I do try my best to stay away from controversial topics. I much prefer to bring people together rather than create divides. So presidential politics is not a topic I dive into eagerly. But my old friend Donald Trump has taken such a beating in the press this week, that I feel inclined to weigh in as someone who has known him intimately for the better part of three decades. That I’m coming to The Donald’s defense may surprise those who know me, as I’m an old school, died in the wool lefty at heart. (I maintain that I am not now nor have I ever been a member of the Communist Party. As for any photos indicating otherwise, for a few months in the sixties I was attending pretty regularly what I thought were avant garde spoken word performances at a friend’s loft but turned out to be secret meetings held by the former staff of the Daily Worker.) Ideologies aside, when a friend is on the ropes, I come to the rescue.

I will not weigh in on his platform or positions on the issues. I am not here to refute anyone who says that he’s a racist buffoon who shouldn’t be trusted to have his finger on a television remote let alone the trigger of a nuclear warhead. All I’m here to say is that when I was down and out in Palm Beach, Donald opened his doors to me and I am eternally grateful. I was staying at Evelyn and Leonard Lauder‘s oceanfront manse, when Evelyn and I got in to a screaming match over the Pritikin Diet (she had been on the high carb/low fat eating plan for years, and when I suggested that angel food cake might not be a health food all hell broke loose). She kicked me out on the street and, as it was smack in the middle of high season, there wasn’t a vacant hotel room within eight miles. After spending a chilly evening sleeping on the beach, I made my way to a pay phone on Worth and dialed Donald. He not only invited me to stay the rest of the week in a private suite at Mar-a-Lago, he hosted a special dinner in my honor.

Donald may be a lot of things to a lot of people, but to me he’s a loyal friend who reached out his hand when I needed it most. If he gets his party’s nomination, I may not end up voting for him on election day, but I won’t be badmouthing him either.

Overheard producer Sue Wager, in sky high stilettos, marveling at the autumn weather in Schenectady – where the national tour for A Gentleman’s Guide to Love and Murder is kicking off.

Saw Rosie O’Donnell and Tatum O’Neal dining together alfresco at a little eatery in Miami.

Spotted just about all of Broadway and just about zero dry eyes at the memorial service for Roger Rees, held at the New Amsterdam Theatre. 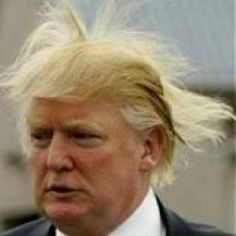