It’s been many years since I stepped foot in Baltimore. I have nothing against the city itself, but a wildly unfaithful ex-lover lives there (let’s just say he treated me to the wrong kind of Maryland crustaceans) and his memory has tainted all of my favorite Charm City haunts. But two recent events rekindled my appreciation for what John Quincy Adams dubbed “the Monumental City”: the death and subsequent media coverage of the district’s long-serving, universally respected congressman, Elijah Cummings, and the opening of the brilliant new theater piece Thoughts of a Colored Man at Center Stage. Written by Keenan Scott II, directed by Steve H. Broadnax III, and thoroughly enjoyed by Scoop Verbena I, the play uses language, music, and dance to explore what it means to be “black, proud, and thriving in the 21st century.” It follows a day in the life of seven black men in Brooklyn and manages to be funny, heartbreaking, poetic, and completely universal. Get yourself to Baltimore to see it this weekend, and if you are avoiding a local, don’t fret. A play this profound must have a New York run in its future!

Back in New York — a city big enough to hold both me and a slew of my exes comfortably — I attended the one-night-only benefit performance of the improbably titled Ian McKellen On Stage: With Tolkien, Shakespeare, Others … And You! (Or, in this case, probably not “You!” as the event was very exclusive, but certainly “Me!”) The evening, presented by ATG and held at their Hudson Theatre, was the first time American audiences had a chance to see what has been the event of the year in the West End. It’s a mixture of scrumptious showbiz anecdotes and monologues — and, let me tell you, nobody knows his way around a monologue like Ian, and nobody takes greater delight in telling a naughty story! I’ve known Ian for decades, but if you haven’t had the pleasure of his company, this show is the closest a townsperson is likely to get. It was, in a word, heaven.

Now, Ian, I know you read me religiously, so I’ll say this to you directly, dear Sir: please announce a proper Broadway run! You know you want it. You know we want it. Let’s consummate this thing like consenting adults!

Speaking of old friends, after the show, Ian positioned himself in the lobby of the theater after the performance to collect money from exiting audience members for his Only Make Believe charity. Among the passersby was none other than Joel Grey. Their embrace was so warm, I checked their IMDb pages when I got home to try to figure out if they had ever worked together. (A sort of “One Degree of Ian McKellen” exercise that produced no results.) After the fundraising, some of us popped into the Ambassador Lounge for an intimate reception. I gushed to director Sean Mathias about the show and pumped him for info on future plans. He was flattered but mum.

I then found myself, along with Ian and Sean, on a private tour of the penthouse above the Hudson, given by ATG topper Mark Cornell, where more drinks were served. I’m told that very few have laid eyes on the space, which is right out of a storybook. Among the tidbits I learned about the Hudson: its original owners were on the Titanic. Elvis played its stage. And it’s the oldest currently operating theater on Broadway. I also learned that I can still drink Sir Ian under the table!

Noticed former tour (and Broadway understudy) “Evan Hansen” Ben Levi Ross in the audience at To Kill a Mockingbird, cheering on former Broadway “Evan Hansen” Taylor Trensch in his first performance as Dill.

Saw Hunter Parrish taking his belt off for airport security at LaGuardia.

Finally, a tease of next week’s column: I’m currently boarding a JetBlue flight to South Florida to attend and cover the buzzy wedding of Broadway PR whiz kid Molly Barnett and her lawyerly fiancé, Dave Larkin. My coverage won’t be exclusive; I’m told I’ll have to elbow a Times reporter out of the way. But, have no fear dear readers — I’ve got sharp elbows. 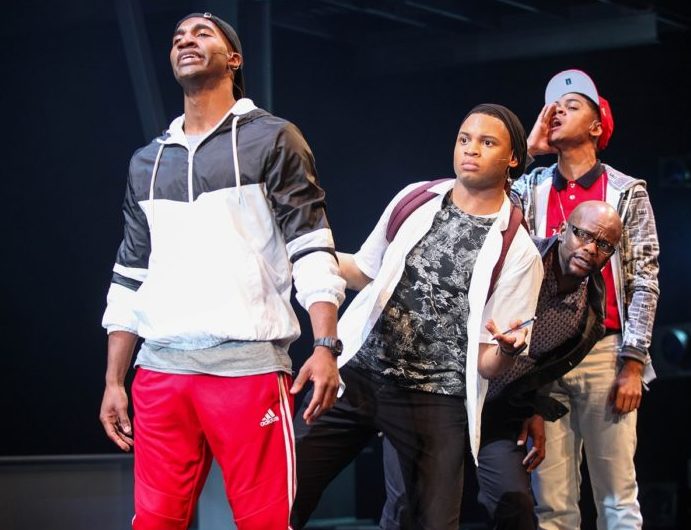