Thursday night’s opening of Sunday in the Park with George also marked the opening of its home and Broadway’s newest theater, the Hudson. Of its many virtues, perhaps the best part of attending a performance at The Hudson is that the booze is served in real glassware. And the glassware came in handy, as champagne was flowing so freely even the photographers on the red carpet were sipping the good stuff (served to them by none other than ATG CEO Mark Cornell, working way, way beneath his paygrade).

Nearby, Stephen Sondheim and James Lapine were huddled in conversation with Bernadette Peters. Cameron Mackintosh, in from London, insisted to Carole Shorenstein Hays, in from San Francisco, that he never has a problem with jet lag. City Center topper Arlene Shuler was beaming at yet another successful Broadway transfer. But no one was beaming more than Naomi Foner Gyllenhaal. I haven’t seen a stage parent so invested in her child’s performance since Sydney Lucas left Fun Home!

Amongst the other luminaries were Holly Hunter, who was telling Randy Rainbow what a fan she is, as well as Rosie O’Donnell, Paul Dano, and Zoe Kazan. Heather Hitchens and Charlotte St. Martin were both in attendance, representing the American Theatre Wing and The Broadway League, respectively. And the top brass from Jujamcyn Theaters, the Shubert Organization, and the Nederlander Organization all turned up to christen Broadway’s newest addition. What an industry!

Backstage, after the show, history was captured when Sondheim and Bernadette paid their respects to stars Jake Gyllenhaal and Annaleigh Ashford. I nearly came to blows with an Associated Press photographer who tried to shove me out of the way, but I didn’t miss the moment.

Spotted Joe Mantello at Sardi’s, fresh off a preview performance of The Glass Menagerie.

Overheard someone scream, “Thanks for voting for Jill Stein you f***ing b****” out of a taxi window at Susan Sarandon by Rockefeller Center. 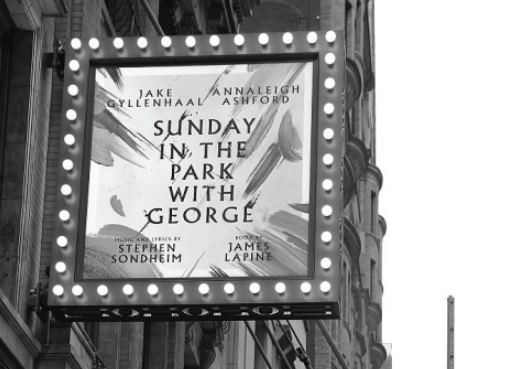