Hours ago, I stepped off a small-but-sturdy Gulfstream at Teterboro and was chauffeured from the tarmac to my front door.  Where, you might ask, was I traveling from in such high style?  St. Barth’s? (Nope.)  St. Tropez?  (Not even close.)   St. Louis? (Getting warmer.)  Detroit!  That’s right, I took a fancy trip to Motor City, all in the name of Love.  Love Never Dies, that is.  Andrew Lloyd Webber’s sequel to that most loved, best known, and longest running show, Phantom of the Opera (heard of it?) had its North American premiere Wednesday night at Detroit’s Fisher Theatre.  Wow!

The Phantom has moved from the Paris Opera scene to Coney Island, but relocation alone can’t soothe an aching heart (as any borderline personality can attest).  Still pining for his beloved, he lures Christine and her family to the outer-borough seaside for one last stab at eternal happiness.  It’s a great set-up, and Phantom fans won’t be disappointed!

Lord Lloyd Webber himself was in the house, flanked by the two most important women in his life — Lady Madeleine Lloyd Webber and daughter Imogen. It seemed that all of Really Useful Group made the trip from London, too.  I don’t think Detroit has heard so many English accents since Ford acquired Jaguar!

I hadn’t been to Detroit since the mid-80’s, just after the once-thriving city’s decline had taken hold.  A former lover had moved to out there to run a marketing division of Chevrolet.  He and I met in the archive room in the basement of the Herald-Examiner when I was a cub reporter and he was a researcher.  We had a brief but passionate romance that ended with a lot of angry words after I found him at a TCBY sharing a sundae with someone who looked like a thinner version of me.  Well, against my better judgement I let him lure me to Detroit with sweet words and a first class plane ticket.  I was there for exactly fourteen days, when I realized I’d never get the image of his yogurt whore out of my head.  So I split town without saying goodbye, and never looked back. The romance was dead, but to this day I can’t step foot into an archive room without getting a flutter in my stomach.

Love, as they say, never dies.

Spotted Get Out scene-stealer Lil Rel Howrey walking around the Lower East Side. 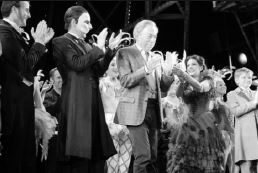