Late spring — with its wall-to-wall luncheons, near-nightly awards ceremonies, and myriad of fundraisers — has long been considered the busy season for theatricals. But in recent years, these frigid pre-holiday weeks between Thanksgiving and Christmas have been giving the run up to the Tonys a run for its money.

Harry Connick, Jr. opened the super limited holiday engagement of his new show, Harry Connick Jr – A Celebration of Cole Porter, at the Nederlander Theatre, in front of a starry crowd that included Glenn Close, Candice Bergen, Sara Bareilles, Jaimie Alexander, Kristin Chenoweth, Joel Grey, Jessie Mueller, Bob Martin, Marc Shaiman, Madison Iseman, Marlo Thomas, Tommy Tune, and Warren Carlyle. Naturally, I was there too. (Fun fact: Glenn Close and Bob Martin have been in the same room together on precisely nine known occasions, and I’ve yet to miss one. You might say that I’m the Zelig of Close Encounters of the Martin kind!)

The show is exactly what we’ve come to expect from America’s more enduring and beloved crooner: one very big band (a 25-piece orchestra to be exact) accompanying Connick, Jr.’s silky vocals and singular phrasing. You’ve never heard Cole Porter given such exquisite treatment, as if every lyric is a precious gem polished to perfection.

Meanwhile, a few blocks due north, the reigning Tony-winning Best Musical, Hadestown, hosted a post-show album signing, attended by more than 800 lucky superfans who nabbed coveted passes through a lottery system. I’m told the cast, alongside director Rachel Chavkin and creator Anaïs Mitchell, went through a grand total of 72 Sharpies in just two short hours. While fans waited, Mitchell indulged them with an impromptu concert.

Heading south again, you might have stumbled upon none other than Bill and Hillary Clinton taking in Ain’t Too Proud. It was Hillary’s second time, and Bill’s first (an early Christmas present from the Secretary to the President). During curtain call, the band added a chorus of “Hail to the Chief,” which caused so much excitement that even the Secret Service cracked smiles. Backstage, a member of the band handed President Clinton a saxophone which he gamely posed with. So, is Secretary Clinton really mulling another run for the White House? She might have demurred, “I’m tempted, but tonight’s about The Temptations,” but nobody put her on the spot.

And, if all of that excitement weren’t enough for a Thursday, yet another theatrical happening sent virtual shockwaves up and down the Rialto: the much-hyped release of the trailer for the movie adaptation of Tony winner In The Heights. The theatricality of creator Lin-Manuel Miranda meets the cinematic scope of director Jon M. Chu meets the marketing savvy of producer Scott Sanders, and the result is a two-minute, thirty-second work of genius. The movie’s not out until the summer; it’s going to be a long six months!

Overheard Richard Jewell star Paul Walter Hauser discussing pro wrestling with a fan in the lobby of the Greenwich Hotel. 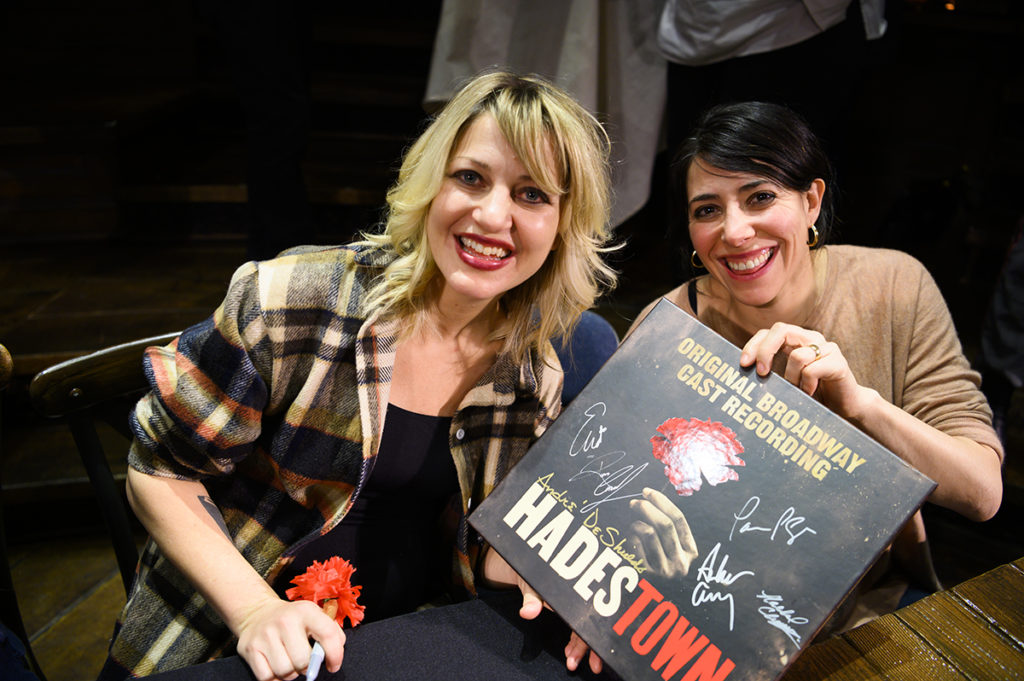