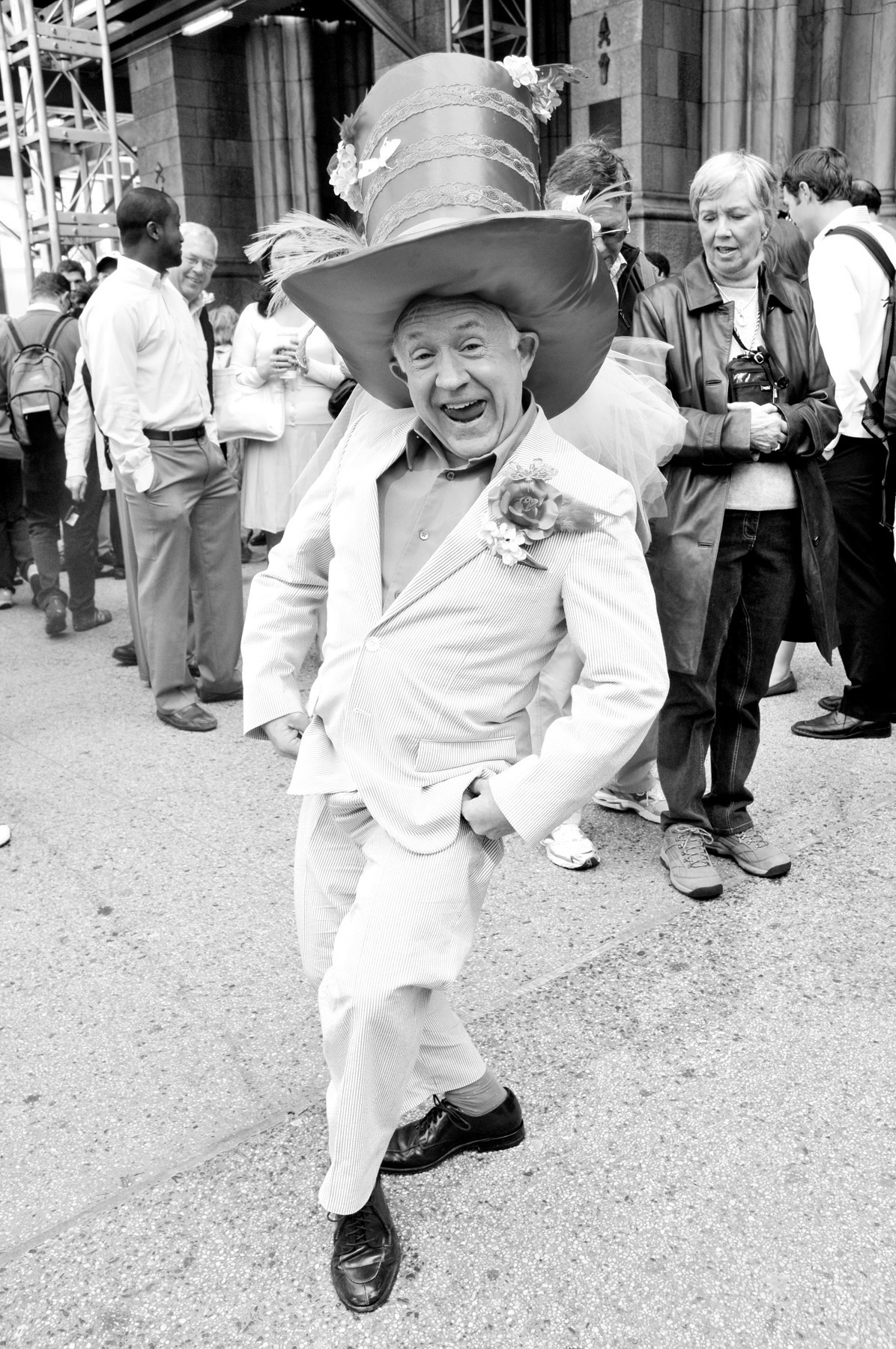 A tale of two Leslies:  Ms. Uggams onstage at the Cafe Carlyle, and Mr. Jordan camping it up at the Easter Parade.

My week centered around two very unique talents who share the same name, proving that two Leslies are better than one!

Leslie Jordan has been making us laugh (and think!) for decades in more film and television appearances than anyone with my limited mathematical skills could count in one sitting. Tiny though he may be, he has proven time and time again just how huge he is when it comes to comedic talents!  Well, now he’s bringing his autobiographical solo show, My Trip Down the Pink Carpet, to New York. He arrived in town this past weekend and his first “official” duty was to make a truly unforgettable appearance at the Easter Parade wearing the most outlandishly out-sized pink hat (apparently inspired by Carrie Bradshaw’s chapeau from the Sex and the City movie). The most outrageous moment came when a group of seven madly-hatted parade-goers representing the seven deadly sins insisted on posing for photos with the petite, pink clad performer. “I’ll only pose with you if you put me right next to Lust!” Leslie shouted with glee. They agreed and photos were snapped. Not exactly the kind of Holy Easter I used to enjoy in my youth, but a heck of a lot more fun than hunting for eggs!

Two Leslies Are Better Than One

Tuesday night marked Leslie Uggams’ glorious return to the New York cabaret scene with the triumphant opening of “Uptown Downtown” at the Café Carlyle. The night was magical (I heard a pretty young lady behind me exclaim “this is the best thing I’ve ever seen at the Carlyle” just as the house lights were coming back up)! A tanned and rested Tommy Tune held court ringside, back in New York City after a long stretch in Florida. It was as if Dolly coming back to the Harmonia Gardens! He was chatting with tablemate Steve Fickinger about Yank! (the Off-Broadway smash musical about a gay love affair in the army during WWII that just announced that it’s making its way to Broadway), saying that he never thought a show like this would materialize. Mo Rocca was there too, chit-chatting about his unlikely newfound favorite hobby: knitting. Amanda Duarte (Pinky Peppercorn herself) was seated with make-up artist to the stars, Jorge Vargas, who was showing off a chic little purse he picked up in South America. The elegantly statuesque Karen Akers was seated nearby, taking it all in. Chuck Cooper and Capathia Jenkins (who is back in Love, Loss, and What I Wore) exchanged a warm embrace in the foyer before finding their table. I also caught a glimpse of the current toast-of-the-town, Patrick Pacheco, whose film, Waking Sleeping Beauty, is on everybody’s lips. I was lucky enough to sneak into a screening of this documentary masterpiece. If you’ve been living under a rock, the film is an unflinching examination of the renaissance of Disney’s animation division in the mid-eighties through the mid-nineties. It’s an absolute must-see! But, back to Ms. Uggams, who looked ravishing in deep blue. She takes the audience on the unforgettable journey from her youth in Harlem (uptown) to her career on Broadway (downtown), introducing us to so many legends (Lena Horne, Billie Holiday, Ella Fitgerald, and Louis Armstrong, to name a few) along the way. The evening was transcendent—my hands hurt from clapping!

With You on My Arm

Tonight is the first preview of La Cage aux Folles on Broadway and I’m attending with Harvey Fierstein. Harvey, do your warm-ups and some light stretching because I’m hoping you’ll dance a “With You on My Arm” soft-shoe with me during intermission!

Tidbits from Around Town

Caught a svelte-looking Ricky Gervais on the corner of Broadway and West 54th Street chomping on a wad of bubble gum and blowing the biggest bubble I’ve ever seen.

Heard that Hilary Kole’s trip to Tokyo to promote her new CD, You Are There, was a smashing success, and now she’s (thankfully) back stateside!

Ran into Joan Rivers at lunch at Le Bernardin, who wanted to know all about the gigantic phalluses in 666. I told her, “it must be seen to be believed!”

My eagle-eyed tipster on the West Coast told me that Billy Stritch was chatting about my favorite jazz hotspot, Birdland, and Jim Caruso’s one-night-only Los Angeles engagement of his famed “Cast Party,” on the KTLA Morning News. Kudos to Billy and to KTLA for discussing cultural highlights from coast to coast!