Bono, Reeve Carney, and The Edge perform on the season finale of “American Idol.”

Last night, The Normal Heart held a special night called “30 Under 30” offering $30 tickets for anyone under the age of the 30. I decided to pop in to see how today’s youngsters would respond to a play that deals with New York in the early 1980s, at the beginning of the AIDS epidemic. It was moving to see how captivated and stunned they were by this remarkable production. In the last line of the play, Ned Weeks (played by Joe Mantello, in a Tony-nominated turn) tells his lover Felix (another Tony-nominated turn by John Benjamin Hickey) about a trip he took to “Gay Week” at Yale (that character’s alma mater) and describes, “six hundred young men and women there. Smart, exceptional young men and women.” The power of this moment was so intensified by the “30 Under 30” crowd that you could see the entire cast moved to tears on stage. As the youngsters streamed out of the theater later, Larry Kramer was there handing out letters. He wasn’t exactly beaming (Larry doesn’t beam), but you could tell how satisfied he is to be reaching an entirely new generation.

I find nothing chicer than a good old fashioned night of theater awards! The Drama Desks never fail to excite! Of course, they could have been giving out gardening awards and I would have had a blast because the event was sponsored by Pol Roger, the makers of one of my all time favorite non-vintage champagnes. I had seven or eight glasses of the stuff, and (just between us) snuck a bottle into my bag for later. My head was spinning! I may not have taken home a trophy, but I felt like a winner!

America fell in love with Reeve Carney on Wednesday night when he made his highest profile appearance yet (to the tune of 29.3 million viewers): on the much-ballyhooed season finale of “American Idol,” alongside none other than Bono and The Edge. The performance was a smash, even though J. Lo missed out on her chance to smooch Spidey (probably for fear of getting pummeled by a mob of angry, drooling girls). For those that follow such things, he was apparently “trending” on Twitter. (Don’t ask me what that means, but apparently it’s a very big deal).

Witnessed a frustrated Liza Minneli trying to light a match for a cigarette behind the Marriott Marquis on a windy day.

Overheard fashion designer Vivienne Tam complaining about how there are no summer movies she wants to see.

Finally, a hearty congratulations to Broadway’s own John Johnson and his beautiful new wife Kristen Bedard. The two were married in Fayetteville, Arkansas earlier this month and are reportedly enjoying a honeymoon jaunt through the Basque region of France and Spain. What could be chicer?

As always, a toast of something sparkling (perhaps a gratis bottle of Pol Roger NV Brut?) to you and yours! 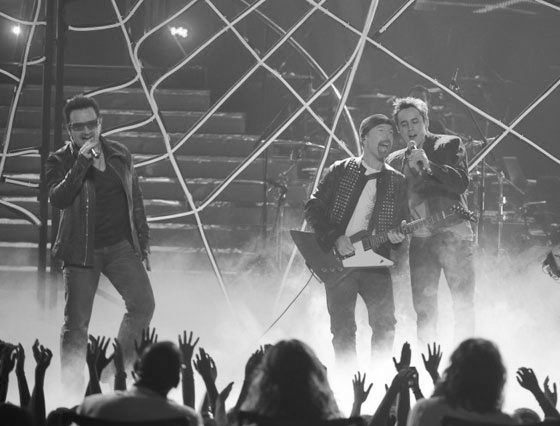