“I Must Have Been Something”

I’ve spent so much time in “business attire” this week that I write this column with my feet soaking in an Epsom salt bath.  It’s tennis shoes for me for the foreseeable future!

My first occasion to throw on my Sunday’s best was for Wednesday’s annual Meet the Nominees Tony Awards press junket, where the nominees from every category descend, en masse, upon the press corps stationed throughout two floors of midtown’s Paramount Hotel.  Not only are my tootsies still recovering, but so is my pulse – after nearly swooning by the presence of Sting, nominated for his gorgeous score for The Last Ship, who is sexier than hell at the tender age of 63.  When the man talks to you, he makes you feel like you’re the only person in the room.  I almost proposed marriage.  As much as I get a kick out of chatting with the nominees, I really love rubbing elbows with my esteemed colleagues in the media.  I had a blast catching up with Michael Paulson, who seems to be enjoying his new theater beat gig at the Times.  WCBS anchor Dana Tyler attracted nominees to her room by posting giant headshots of herself on the door (it worked – she nabbed sit-downs with everyone).  Broadway.com’s Paul Wontorek strolled around the floor holding his iPhone in front of him, capturing live footage on some new social media application called Periscope that he tried, unsuccessfully, to explain to me before barking, “It’s the future, Scoop!”

I also got gussied up for ABC’S Nashville in Concert at the Beacon.  I was invited as a personal guest of “Nashville” producer Steve Buchanan, who heard that I’m a giant fan of the series and extended the offer.  The concert was a dream come true for anyone who watches the show and/or is a fan of country music. Charles Esten, Clare Bowen, Jonathan Jackson, Sam Palladio, Chris Carmack, and Will Chase had the entire crowd eating out of their collective palms.  Buchanan, who serves as president of Opry Entertainment Group in his spare time, is working on a “small screen”-to-stage adaptation of a different sort with the Broadway-bound Moonshine: That Hee-Haw Musical that he is producing with Opry colleague Sally Williams.

And, speaking of landmark moments in music history, I got a special invite to witness the cast of The Visit record its Original Broadway Cast Recording at Avatar Studios.  It must have been a poignant experience for John Kander, as it’s the last score he and Fred Ebb ever wrote together.  Similarly poignant, I’m sure, for star Chita Rivera, whose remarkable career was shaped by her being Kander and Ebb’s muse.  She was dressed head-to-toe in black, as is her way.  But there was nothing somber about the occasion.  The cast giggled, as the ever-charming Roger Rees held court in the green room, when they weren’t singing their faces off.  More than once someone remarked that “Freddy’s presence” could be felt throughout the day.  Hearing the 82-year-old Rivera sing out, “Look at me / I’m not the woman that I used to be / There’s no denying that there’s less of me” you couldn’t ignore the irony of the lyric.  It’s true, Chita is not the woman that she used to be, but there isn’t any less of her, I assure you.  If anything , there’s more.  The years have only deepened her singular talents and her off-beat beauty, bringing their edges sharply into focus.  She’s a rawer performer than she’s ever been, and I defy anyone in her presence to take their eyes off her.

Tidbits from around town….

Spotted Broadway producer Stacey Mindich dining with the entire City Center Board at The Palm, before taking in a performance of Fun Home.

Caught Downton Abbey creator Julian Fellowes trying to hail a cab on 8th Avenue to no avail, before a kindly passerby introduced him to the wonders of Uber.  Thanking him, Fellowes said, “So kind of you – it’s the first day of rehearsal for School of Rock and I don’t want to be late!”

Witnessed former “Real Housewife” Camille Grammer howling with laughter at a recent performance of It Shoulda Been You. 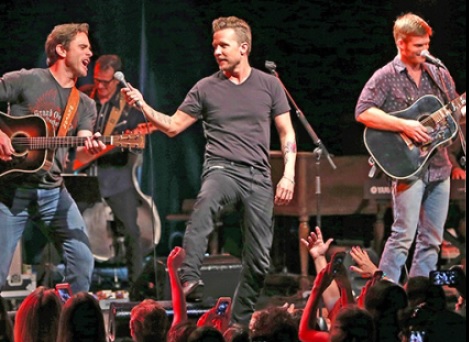