Who could have ever imaged that this Broadway season, which kicked off last summer on the highest of high notes, wouldn’t find the tippy top of its peak until its very last day? Yes, this past Thursday marked the official close to the season, and its very last opening night — and oh what an opening. Shuffle Along, Or The Making of the Musical Sensation of 1921 and All That Followed exploded onto the stage of the Music Box Theatre, and into Broadway lore for decades to come. If you don’t want to be thrilled, moved, titillated, delighted, and floored, stay far away from this dizzying and dynamic production. But if you’re like me, I suggest you march over to the box office and snap up every ticket you can find. Even it’s top ticket price is cheaper than an hour with any sex worker worth his or her salt, and at least twice as much fun!

I was handed prime seats by some delicious young lady slammed up like a white Diana Ross. They plopped me down in heaven, or the closest thing to it, directly in front of Lorne Michaels, who was seated beside the great Joe Mantello (who was just dubbed “our modern-day Elia Kazan” by the New York Post’s Michael Riedel, based on his work this year on both Blackbird and The Humans). In front of me was David Hyde Pierce, who was enjoying the show so much he was almost putting on his own show! Across the aisle sat the great artists themselves, visionary director and book bookwriter George C. Wolfe and superstar choreographer Savion Glover.

What can you say about the superlative cast? I’ve never see a group of performers pull off such hard work with such grace. It’s a sight to behold. Audra as you’ve never seen her. Stokes at his most commanding. Billy Porter, Brandon Victor Dixon, and Josh Henry all wowing at every turn. Adrienne Warren pulls off one of the year’s most magical numbers. And Brooks Ashmanskas does something astonishing, playing every white guy in the story. But it’s the ensemble — the tap dancing, floor stomping, rafters shaking ensemble, that steal the show.

Is it a revival or is it a new musical? Who cares? It’s a remarkable achievement in the American theater, and it’s an absolute must see!

Overheard a four-year-old in Brooklyn Heights tell his mommy, “Donald Trump is a robot, you know that.”

Saw Veep star Julia Louis-Dreyfuss and hubby Brad Hall dining at Soho House, and charming everyone in their path!

As always, a toast of something sparkling (hell, it’s the end of the season, make it Dom!) to you and yours! 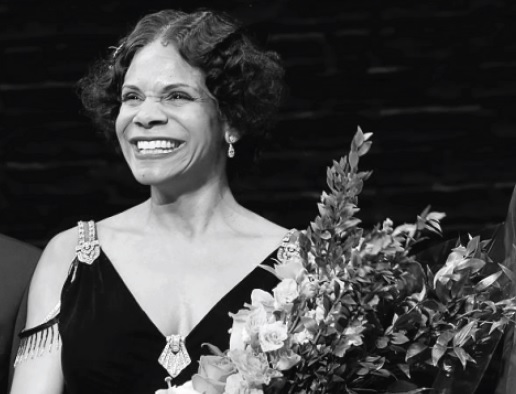