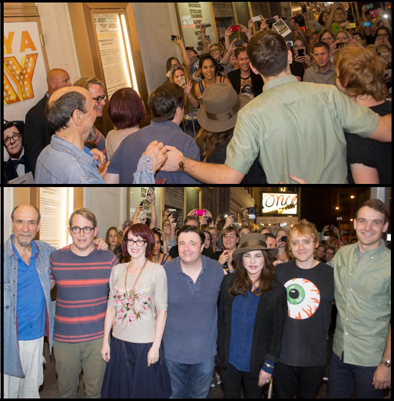 It’s Only A Mob

Last night, I found myself running down 45th Street toward the Schoenfeld to get some shots of the legends in “It’s Only A Play” as they came out the stage door. I was expecting a moderate crowd, and had been going to the gym for a week to prepare for the fans (especially for those of Rupert Grint, who are said to be ravenous). As I approached the theater though, my expectation of a moderate crowd was all at once shattered. Nothing short of a full blown mob extended far beyond the marquee. People were climbing over each other to get a glimpse, screaming and wild with anticipation. Some had been waiting since 11 a.m. just to be in the presence of their favorite star. At one point, after the curtain went down, traffic stopped, utterly unable to get through.
Stuck in the back, I realized, if I don’t take charge, Nathan, Rupert, Micah, F. Murray, Megan, Stockard and Matthew would come and go and my opportunity would be wasted. I took a deep breath and pushed through the sea of bodies. People were screaming, cars were beeping, but finally I got to the front. There they were. Six luminaries brought together to create an historic cast. In this double feature Photo of the Week, the cast poses for my picture, and turns to greet those adoring fans.