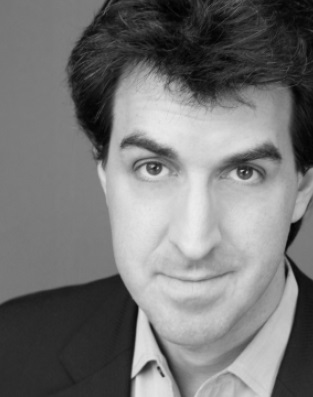 Jason Robert Brown, regarded as one of the preeminent composers of his time, has dazzled audiences with, among others, his universally adored score to The Last Five Years; his celebrated song cycle Songs for a New World; and his Broadway debut, Parade, for which he won the 1999 Tony® Award for Original Musical Score. He returns to the Great White Way this season—as composer, lyricist and orchestrator—with The Bridges of Madison County, a musical adaptation of the this classic best-selling novel by Robert James Waller. Bridges opens February 20th at the Schoenfeld Theatre under the direction of Bartlett Sher, a book by Marsha Norman, and starring Kelli O'Hara and Steven Pasquale, whose extraordinary vocal gifts are only amplified by the score's gorgeous, soaring melodies. Jason—also a skilled conductor, arranger, and performer—took some time out of final rehearsals at Bridges to join us On the Couch.

I hope it's my musical talent, because I've never paid much attention to anything else.

If we're speaking of my career, then I think it would be the opening night of “13” in London, which was my professional directing debut as well as a real vindication for me of a show I love so much. But if we're speaking about my life, I have a constant and ever-increasing feeling of such enormous pride when I am with my two daughters – they are by far my proudest achievement, and of course I have a wonderful collaborator in my wife, Georgia.

I am a BBQ fanatic. I don't even really distinguish between what's good or bad or Texas or Memphis or any of that, I'm not a connoisseur, I'm just a fanatic. Put BBQ in front of me and I'm happy.

What is your favorite condiment?
I don't have the intellectual energy to answer this question.

The opening of Act 2, honestly.

You know, I have so few vices, I'm not giving any of them up. You should be ashamed of yourself even for asking.

I wrote an orchestral piece with Marsha called “The Trumpet of the Swan,” and I'm dying to conduct it here in NY. I love conducting, but my schedule doesn't allow me to do it all that often.

My parents were both extraordinary communicators. They knew how to use language, how to use nuance, and how to be patient.

That millisecond between the preparation and the downbeat.

The one where we have to hate everything.

Why? Why bring that up now? I'm relatively happy, why make me relive that?

I spent a glorious summer in Spoleto the year after Georgia and I got married. It was paradise. I hope to get back there soon, this time with my daughters, so they can see where I was happiest.

I better not be seeking anything in a romantic partner at this point; but if you were to ask what is the thing that keeps my marriage working, it's patience, and it's compassion, and it's intelligence, and it's perseverance.

I'm not that ambitious. Let's work on getting enough sleep.

Everything gets done, somehow.