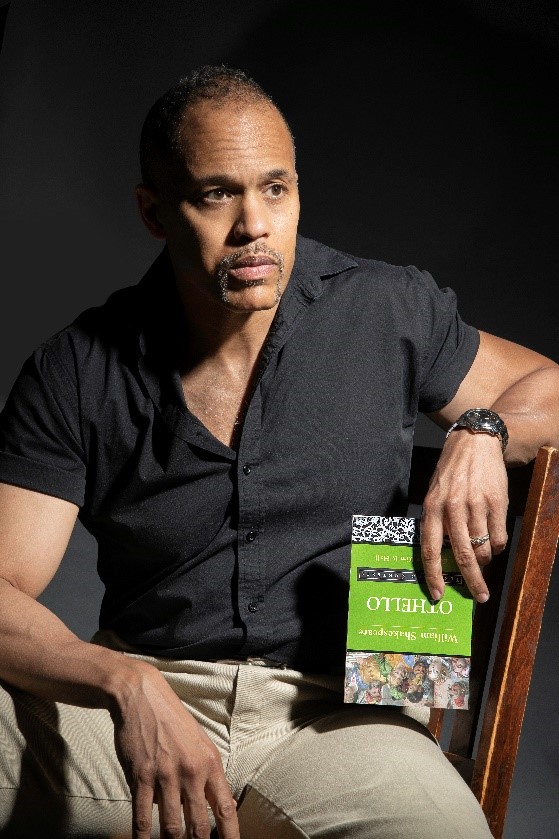 Actor and playwright Keith Hamilton Cobb, known for his work on TV shows such as All My Children and The Young and the Restless, now takes the stage in his tour-de-force new play American Moor. After previous engagements at ArtsEmerson, The Anacostia Playhouse, Boston Center for the Arts, and The Sam Wanamaker Playhouse at Shakespeare’s Globe Theatre in London, Keith now makes his Off-Broadway debut at Cherry Lane Theatre, now running until October 5th. Join us ‘on the couch’ to learn more about our star in our season opener.

What do you consider to be your best asset?
How difficult to answer any of these questions with the slightest degree of humility…My best asset is being me, plain and simple. All in all, I suspect I’m a fairly worthwhile human being.

What was your proudest moment?
That’s like the first question… If I make it to late in life and I can look back on a broad and diverse body of creative work, that will be my proudest moment. I guess it hasn’t happened yet.

What is your favorite drink?
There’s nothing like water. If you are asking about cocktails, I’m a bourbon drinker. Widow Jane is particularly sublime.

What is your favorite food?
I don’t really have a favorite anything, so these sorts of questions are also difficult… I’m partial to good Italian cuisine, I suppose.

What is your favorite condiment?
Really???  It’s a toss up between green Tabasco Sauce and Ketchup.

What is your current obsession?
I guess, if I had time for obsessions, I’d have several. But developing and mounting American Moor over the last seven years has left little time or money to pursue such things. I imagine you could say that American Moor has been my obsession.

If you could give up one of your vices, what would it be?
Vices? Me?

What is the one professional accomplishment you long for most?
To be a creative that other creatives call and say, “You don’t need to audition. I just want to do the work with you.”

What is the one thing you waste too much money on?
I’m a poor actor. I don’t have money to waste on anything.

What do you consider to be the single greatest threat to your health?
Being Black in America.

What is the single best trait you inherited or learned from your parents?
Contemplativeness.

What is the single worst trait you inherited or learned from your parents?
There isn’t one.

What in the world most thrills you?
Women.

What current trend in popular culture most irritates you?
Almost every one of them. How much time ya got?

What was the single most embarrassing moment you’ve ever experienced on the job?
I can’t think of one particularly, not that there have been many. I think, though, that there were several occasions while I was still very new to the profession, and limited in my skills, where I was on stage knowing full well that I was doing a perfectly awful job and pretending that I was worthy of the position that I had been given. At other times, I suppose I was just as mortified to be standing on stage doing something, like an ill-conceived production number, and doing it perfectly well, but knowing that it was the stupidest thing that a director had ever devised.

What is your favorite place in the world?
I really don’t think I’ve been to that place yet, but on a stage somewhere engaged in some transcendent creative experience has to be up there among the top two or three.

What is the most important trait you seek in a romantic partner?
Self-love and emotional self-security.

Do you prefer the company of dogs or cats?
The right cat can be truly a blessing forever, but I have to say that I’m ultimately partial to dogs, bull breeds particularly.

What would have to happen to make today the best day of your life?
Nothing. My life has been difficult, circuitous, and utterly inexplicable, but there isn’t a moment of it that I’m not grateful for, regardless of how much I complain.

What is your personal motto?
Love first… then go eat, go sleep, go to the gym… you’re of no good to anyone if you’re not healthy.