One of the great injustices of dying, it always seemed to me, is that everyone stops celebrating your birthday. Just because you’re dead doesn’t mean your birth shouldn’t be commemorated! The exceptions that prove the rule? Jesus Christ, naturally, and – it turns out – the great Harold Pinter. The Hackney-born dramatist who could say more with a single silence than writers ever do with words would have turned 89 this past Thursday, and so the starry cast of his play Betrayal – currently playing Broadway’s Jacobs Theatre – led its audience that night in a symbolic toast, as Tom Hiddleston instructed the crowd to “Raise a metaphorical glass of corvo bianco” to their author.

Pinter, it occurs to me, is the ideal playwright for our hyper-partisan era. Politics always seem to be bubbling just barely below the surface of his characters’ private lives. “What did you know and when did you know it?” is as relevant a question in Betrayal as it is in a Congressional hearing.

I knew the man more for his work on the screen than his work on the stage, having first met him at the multi-day press junket for The French Lieutenant’s Woman at the Beverly Wilshire back in 1981. I found him fascinating and enigmatic, and I was instantly drawn to him. He told me, excitedly, that he had run into Muhammad Ali at the lobby bar, and I told him he didn’t strike me as a boxing fan. “Really? I feel like every scene I write is something of a boxing match,” he mused. He had a point. I loved thinking of the man known for his famous pauses striking up a conversation with a man who never seemed to take a breath.

About those pauses: the singular and all-important rhythms of Pinter’s plays have daunted and bedeviled actors and directors alike for decades and decades. How bold, then, for Jamie Lloyd – the director of this brilliant Betrayal and the world’s leading Pinter interpreter – to set his production on a turntable, where every line has to be timed perfect with the motion of the stage. It’s the most astonishing choreographic feat since the death of Gower Champion!

Lloyd got to know his hero before he died. One time the young director worked up the nerve to ask about those famous silences. “Oh bollocks to the Pinter pause!” said the writer, and it was never discussed again.

Witnessed Oscar and two-time Obie Award winner Dianne Wiest on the uptown 1 train, graciously removing her tote bag from a neighboring seat, allowing a townsperson to sit beside her.

Caught songwriter Benj Pasek humming the score on his way out of a recent performance of MCC’s The Wrong Man.

Spotted the real Ben Fong-Torres checking out Almost Famous at San Diego’s Old Globe. “Isn’t it odd to see your life portrayed by an actor?” I probed. “Oh, I’m used to it by now, Scoop!” he replied. 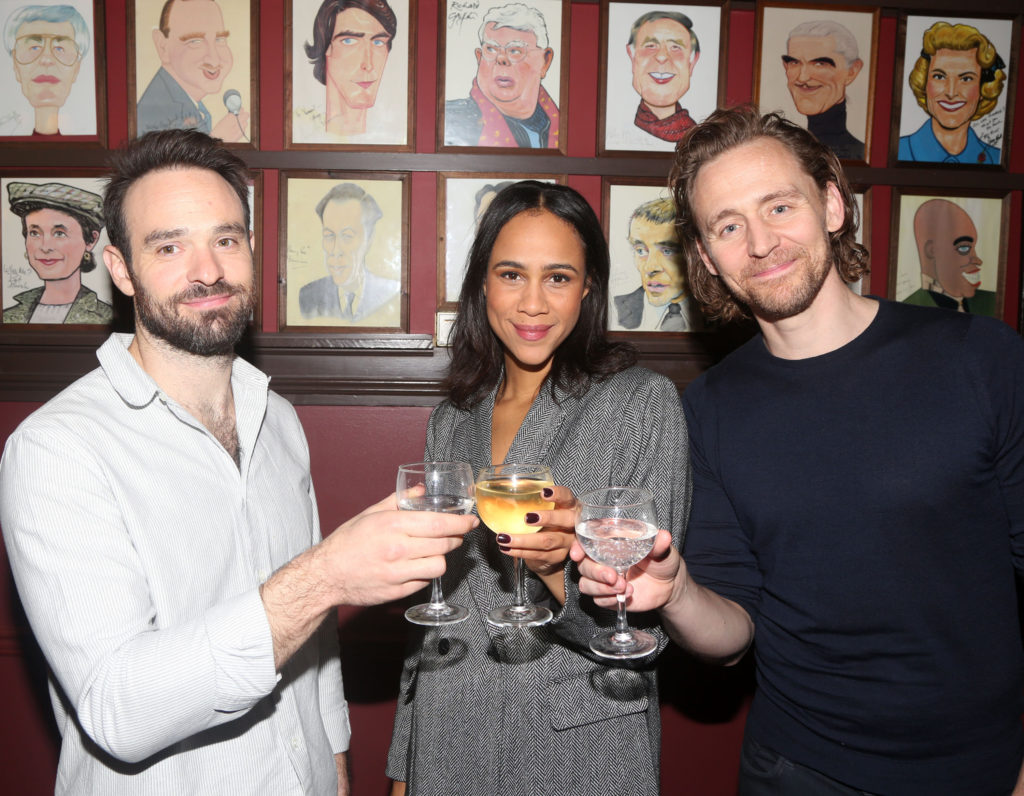