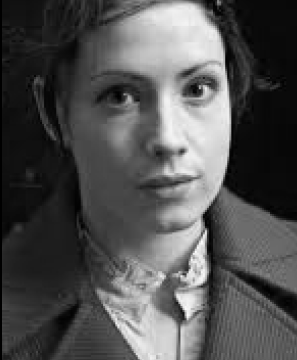 This season, British playwright Lucy Prebble is staking her claim in New York – more specifically, at the Barrow Street Theatre, where her thrilling, thought-provoking, UK Critics' Circle Award-winning play The Effect is making its North American premiere with direction by David Cromer. Lucy, a writer for the stage and screen (as well as hit video games!), has mastered the art of storytelling, with a fast, witty voice and a keen eye for the human experience. Her first play, the Sugar Syndrome premiered at the Jerwood Theatre Upstairs with critics praising its sharpness and dynamism. She is also the creator Enron, a 2009 play based on the scandal, and the hit ITV2/Showtime series “Secret Diary of a Call Girl.” We are thrilled to have the charming Lucy Prebble On the Couch!

What do you consider to be your best asset?
My friends.

What was your proudest moment?
I received a recognition award from my old university at Sheffield and my mum was there to see it and that was moving. But really the few times I've felt proudest is when I've written a really, really good line or moment and it's night and I'm on my own cos that's always how it is and I breathe out from it.

What is your favorite drink?
Wine. Just wine in general.

What is your favorite food?
I love Thai food. I didn't have any until I was in my late 20s and it was so great to find I had a whole new favorite thing nearing thirty!

What is your favorite condiment?
Condiments are overrated, generally.

What is your current obsession?
Fallout 4.

If you could give up one of your vices, what would it be?
Guilt, over-eating, feeling guilty about over-eating.

What is the one professional accomplishment you long for most?
I would like a long-standing creative partnership or team that evolves and flourishes over decades.

What is the one thing you waste too much money on?
Books I never read.

What is the one activity you waste too much time doing?
Getting lost in the internet and not reading my books.

What do you consider to be the single greatest threat to your health?
Heart disease, statistically.

What is the single best trait you inherited or learned from your parents?
Curiosity.

What is the single worst trait you inherited or learned from your parents?
Repression.

What in the world most thrills you?
Making my friends laugh.

What current trend in popular culture most irritates you?
I'm not really irritated by culture.

What was the single most embarrassing moment you've ever experienced on the job?
Every morning when I reread what I wrote the night before.

What is your favorite place in the world?
New York.

What is the most important trait you seek in a romantic partner?
Intelligence.

Do you prefer the company of dogs or cats?
Short-term dogs, long-term cats. I love them both.

What would have to happen to make today the best day of your life?
Forgiveness.

What is your personal motto?
Stop showing off in front of your brother's friends.