In the world of Andrew Lloyd Webber, cats may have nine lives but there are only two things that never die:

2) The Phantom of the Opera

And, of course, things that live forever get to celebrate many, many anniversaries. My readers will surely remember my coverage of the star-studded blowout for the Phantom’s 25th Anniversary exactly five years ago, which means that it’s now time for my coverage of its 30th.

Whereas 25 was all about glitz and stars, 30 was more of a family affair – literally. Andrew showed up with his wife Madeleine, sons Alastair and William, and daughter Imogen. Imo (as her friends call her) was also there on official duty, running live red carpet coverage alongside Lloyd Webber muse Sierra Boggess. (Boggess was one of the most cherished Christines in Phantom history, and also originated that same role in the sequel, Love Never Dies).

The rest of the crowd was family of a more proverbial nature: Harold Prince (who turns 90 next week, meaning he was nearly 60 when he delivered the biggest hit of his – or anyone’s – career, so stop whining about being tired and wanting to slow down), Cameron Macintosh, Foresight’s Allan Williams (who was Phantom’s original company manager, before becoming a top GM) and Aaron Lustbader, Phantom’s longtime press agent Michael Borowski (aka DJ Mike Borowski, aka Special Agent DJ Mike Borowski), a slew of former Phantom cast members like Norm Lewis, Howard McGillin and Rebecca Luker, and the cast of Love Never Dies, who flew in from the road to celebrate.

The show is as thrilling as ever, with the current cast delivering all the spectacle and romance you remember. Whereas some long running shows deteriorate with time, Phantom seems to get sharper as year goes by.

After the seven-minute standing-ovation (I didn’t time it, but I felt it in my bones), Sarah Brightman made a surprise appearance to perform the title song along with the kids from School of Rock. There aren’t many ex-wives who would continue showing up to celebrate your accomplishments thirty years hence; I guess love really does never die.

The after party at the Rainbow Room was the kind of old-school Broadway blowout we rarely see anymore, since Broadway’s loyal bean counters tend to be more interested in maximizing returns on investments than delivering glamour to the people. Well, Andrew has spent decades and decades proving the two aren’t mutually exclusive. In fact, they often go hand-in-hand. Even the notoriously finicky Empire State Building helped mark the occasion by installing a custom designed light show, synchronized to Phantom’s most iconic tunes.

It felt like the most exclusive party in the world and, though I was not, myself, afforded the kind of facetime with Lord Andrew that my old buddy Cindy Adams was granted, I was still grateful for the access.

Tidbits from around summer towns…

Witnessed … Bleachers frontman and The Ally Coalition (TAC) co-founder Jack Antonoff shout down a pro-Isreali heckler, in defense of his buddy and collaborator Lorde, as they played a magnificent set together at Wednesday’s “Talent Show” benefitting TAC. The evening raised $200k for the organization that supports LGBTQ youth centers around the country and advocates for equality.

Spotted … Gina Gershon all bundled up with little more than her eyes, nose, and iconic lips exposed, walking up Hudson Street with a pal. 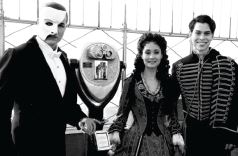