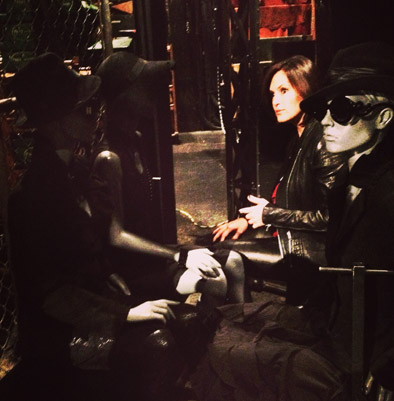 Mariska Hargitay may play the serious, strong-willed Detective Olivia Benson on “Law & Order: Special Victims Unit,” but, when it comes to Broadway shows, like Kinky Boots, she is not ashamed to get a little excited. Last night, Mariska attended the Tony Award-winning musical for a second time, staying after curtain to snap some photos with the cast. The fun didn’t end there, though. Hargitay took some time (twenty minutes) to admire the inner working of the show. In this photo, our favorite television heroine poses backstage with some props. It took a couple tries to get the shot just right, but Mariska finally found her inner mannequin. It’s ultra-chic, if you ask us. Keep up the passion, Mariska… and keep seeing Kinky Boots!