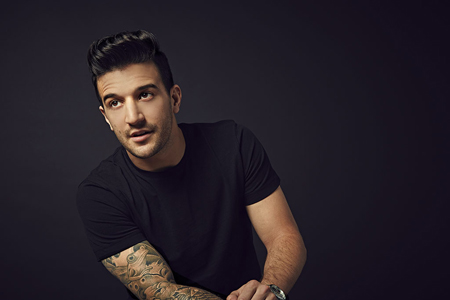 With 27 seasons under its belt, some may argue that the dancing professionals on ABC’s hit primetime show ‘Dancing With the Stars’ have surpassed the level of fame its titular ‘stars’ actually bare. Coming out of the franchise on top (and not just because he has won that famed mirror ball trophy three times) is bonafide (SPELLING?)  triple threat, Mark Ballas. After a star-making turn as Frankie Valli in Jersey Boys, Ballas went back to his roots in the ballroom (and back to sunny Los Angeles) to bring America the most intricately detailed and masterfully executed routines the DWTS franchise has ever seen. It didn’t take too long, however, for Ballas to feel The Great White Way calling him back east. This time, Ballas inhabits the ever-endearing ‘Charlie Price’ (who happens to have two left feet…) in Havey Fierstein and Cyndi Lauper’s Tony Award Winning Best Musical, Kinky Boots.  Take it away, Mark… you are On The Couch.

What do you consider to be your best asset?
I’d say feeling other people’s energy, knowing if someone is down, needs to talk or a hug, been that way since a child.

What was your proudest moment?
I’ve had some incredible moments in my life from tv, music, Broadway but marrying my wife BC takes the #1 spot.

What is your favorite drink?
Old fashioned. I’m a whiskey lover.

What is your favorite food?
Pizza is always my go to when I’m having a cheat day. I love Gotham’s on 52nd here in NYC. Crust is on POINT!!!!

What is your favorite condiment?
Ketchup. I put it on everything. That’s the British in me.

What is your current obsession?
For pleasure: the UFC
For personal: bettering myself at my art/skillset & my wife & I new music for our band Alexander Jean.

If you could give up one of your vices, what would it be?
I already gave up mine which was smoking 🚬 .

What is the one professional accomplishment you long for most?
Becoming an EGOT. Almost got an Emmy once, still got a long way to go tho lol,

What is the one thing you waste too much money on?
Starbucks.. it really does add up!!

What is the one activity you waste too much time doing?
I have a tendency to be over compulsive with things so I’ll tend to recheck things over and over when I could just walk away and be done.

What do you consider to be the single greatest threat to your health?
My allergies are horrendous, so being back and forward from LA & NYC it can get pretty bad..

What is the single best trait you inherited or learned from your parents?
My discipline & work ethic & my need to never stop learning & improving, my work is never done.

What is the single worst trait you inherited or learned from your parents?
Same answer as before. Being obsessed is a blessing & a curse.

What in the world most thrills you?
Performing, being on stage, entertaining fans.

What current trend in popular culture most irritates you?
I find it irritating that through social media people with a negative message & not much talent are glorified, given careers and are becoming role models to young kids all over the world.

What was the single most embarrassing moment you’ve ever experienced on the job?
When I was playing Frankie in Jersey Boys on Broadway, one of the other seasons who shall not be named “Drew Seeley” pranked me on stage in the silliest way possible, and I forgot a line & hard a hard time not laughing for about 2 minutes which is a long time. I don’t think anyone in the audience noticed but i was having a really hard time on stage 😂

What is your favorite place in the world?
I’ve been blessed to travel, but my wife & I recently went to Thailand for our honeymoon & we fell in love.

What is the most important trait you seek in a romantic partner?
Affection, Communication, Confidence and Honesty.. communication is key tho.

Do you prefer the company of dogs or cats?
Dogs. I’m allergic to cats even tho I love them. Wish could have one.

What would have to happen to make today the best day of your life?
A time machine would appear, wed hop in go back In time to the Michael Jackson bad tour concert, then hop back in and go to Queens live at Wembley concert. Than hop back in go into future to BC and I winning a Grammy award.. then maybe go back In time to Christmas at the Ballas house hold when both my grandparents were alive and spend the rest of the evening with them 🙂

What is your personal motto?
“The mind is like a parachute it works best when it’s open”