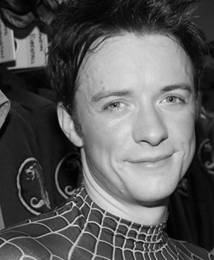 Matthew James Thomas is now the star of the Tony-Award winning Pippin, but before he was Charlemagne's charming son, he was feuding bad guys and saving the day as Peter Parker/Spider-Man in SPIDERMAN Turn Off The Dark at The Foxwoods Theatre. In light of the show's move from Broadway to Las Vegas, we're bringing back Matthew's famous On the Couch from early 2012 – a quick-witted young actor at the dawn of his success!

Tunnocks Caramels and Body and Soul, a book by Frank Conroy.

Pork pies, I could do without them. But I just can't help it.

Hard question. To be in a movie with Freddie Mercury directed by Luthur Creek co starring with Tom Hanks called 'The Clock Man.'

Mayonnaise and cancer… Everything gives you cancer.

Doing too much at once and… I'm over organized which is a little annoying sometimes. They are under organized and it drives me nuts.

The universe, people… My job, Oh and Six Flags.

People who enjoy over tuned over processed, forced pop music.

Haha jumping into a wall and banging my head because I was being stupid.

Both. Although my dog may disagree with that comment.

Richard Branson would have to phone me offering me a seat on the first virgin galactic flight to outer space, whilst I was in the studio finishing my album and I'd get a call saying they had invented a way for all humans to fly and that some billionaire randomly decided to to donate a man (and dog) operated lowest capable depth submarine to me, along with a year supply of allsaints boots and the worlds oil supply would run out forcing us to drive water operated flying cars.