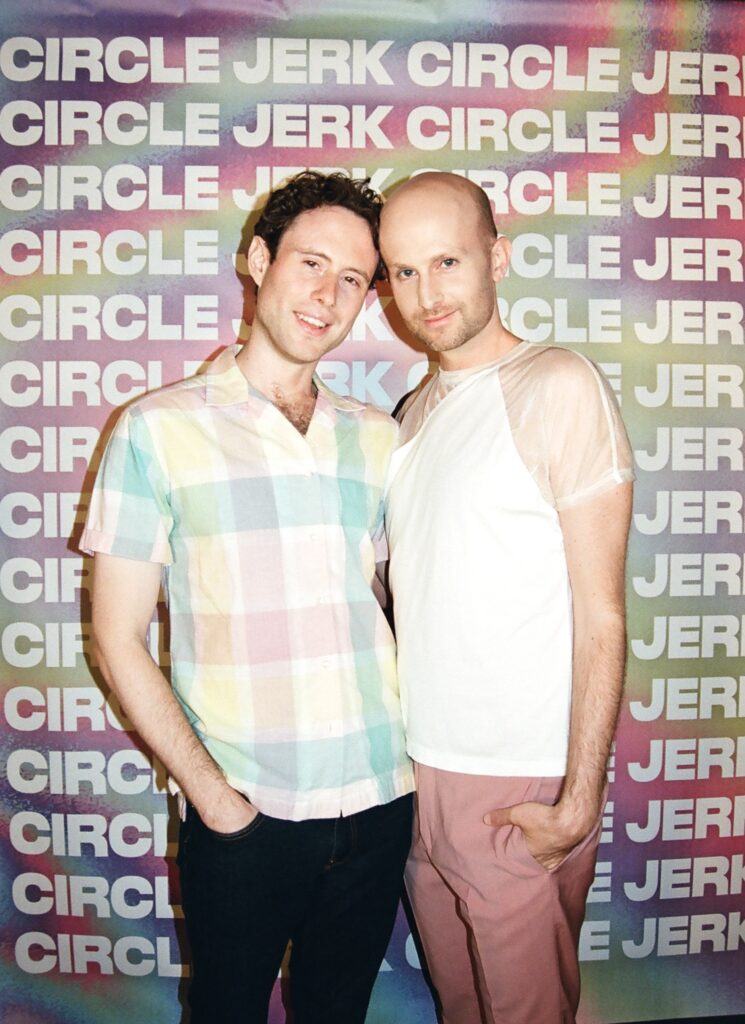 Patrick Foley & Michael Breslin are two of the three hit stars (and also co-writers) of Off-Broadway’s Circle Jerk, which opened on Tuesday featuring a star-studded guest list including producer Jeremy O. Harris and his cronies – a bleached eyebrowed Julia Fox, Juliana Canfield, Larry Owens, and Ayo Edebiri. The duo kept busy during the pandemic with two massive hits – they were the writers and executive producers for Ratatouille: The TikTok Musical which raised $2 million for the Entertainment Community Fund and they began their digital journey with Circle Jerk, making it the first piece of digital theatre to ever be nominated for a Pulitzer Prize. Patrick Foley and Michael Breslin join us On The Couch for this final issue.

What do you consider to be your best asset?
Michael Breslin: Perhaps my ability to listen.
Patrick Foley: My tolerance for rejection.

What was your proudest moment?
MB: Working with our company Fake Friends to produce this in-person production of CIRCLE JERK.
PF: The first preview of CIRCLE JERK at The Connelly.

What is your favorite drink?
MB: Diet Coke!!!!
PF: A Negroni made by our director, Rory Pelsue.

What is your favorite food?
MB: Steak + seafood + sides from Gallagher’s steakhouse
PF: All.

What is your favorite condiment?
MB: Grey poupon
PF: Allegedly when I was a baby the only thing that would stop me from crying was mustard. It continues to soothe to this day.

What is your current obsession?
MB: The Staircase on HBO
PF: There is a YouTube channel called “The B1M” that focuses on construction and infrastructure projects that I find endlessly fascinating and calming.

If you could give up one of your vices, what would it be?
MB: Cocktails – but never.
PF: I wouldn’t.

What is the one professional accomplishment you long for most?
MB: Broadway!
PF: It’s my dream to be notable enough to have a “Grub Street Diet” column. I’m addicted to reading about what people eat.

What is the one thing you waste too much money on?
MB: Cocktails
PF: Something I call “fancy tuna.” Which is just Tonnino tuna fillets. They’re expensive but they’re so worth it.

What is the one activity you waste too much time doing?
MB: Cocktails
PF: Cocktails

What do you consider to be the single greatest threat to your health?
MB: Cocktails
PF: My insistence on working in the American theater

What’s the single best trait you inherited or learned from your parents?
MB: Sense of humor from my father/intelligence from my mother
PF: A dark sense of humor

What’s the single worst trait you inherited or learned from your parents?
MB: Cocktails!!!!!!
PF: A fear of flying

What in the world most thrills you?
MB: Artists who fearlessly make their art regardless of what institutions tell them.
PF: The chaos of tech!

What current trend in popular culture most irritates you?
MB: Identity politics being wielded as shields from difficult and necessary conversations.
PF: Abbreviated words like “doggo” and “brecki” will drive me to homicide.

What was the most embarrassing moment you’ve ever experienced on the job?
MB: ??
PF: When you have to say your name, height and location at the end of auditions. What kind of twisted torture is that? Look it up!

What is your favorite place in the world?
MB: Bermuda 🙂
PF: Bed

What is the most important trait you seek in a romantic partner?
MB: Intelligence.
PF: Kindness.

Do you prefer the company of dogs or cats?
MB: DOGS!
PF: Dogs

What would have to happen to make today the best day of your life?
MB: Tony, MacArthur, Pulitzer, love, champagne, luxury hotel, family. Then a cheeseburger.
PF: Idk probably like me breathing more and reading Pema Chodron.

What is your personal motto?
MB: Everything happens for a reason.
PF: There’s no such thing as bad timing.