In this business, as my old pal Carol Fineman used to say, there are the greats, the near-greats, and the ingrates.  Well, the greats don’t come any greater than the great Tommy Tune.  Everything about this man was built for a life in show biz, from his natural talent to his towering stature.  Even his name — yup it’s real — feels custom-made for a born legend.

Tommy turned 80 this week, but he still possesses the sunny energy of a freshly-minted chorus kid.

I first laid eyes on Tommy as a dancing waiter in How Now, Dow Jones.  To be clear, he was the dancing waiter; I was merely an audience member.  I was smitten.  How could anyone be that in control of that much limb?!  And that punim!

It would be 10 long years before we’d meet face-to-face.  He was doing advance press for his Broadway directorial debut, The Best Little Whorehouse in Texas.  At that point, my Herald-Examiner was still pretty new, and I was anxious to impress my editor with a scoop — any scoop I could get my hands on.  I called him at the appointed time, and he must have sensed the desperation in my voice.  I told him that my editor was breathing down my neck for a hot exclusive, and I felt like I was on the brink of getting fired.  He took a beat and then said, in his signature Texas drawl, “Well, then let’s come up with something real good.”  He proceeded to tell me his grand plans for the opening night party, “We’re gonna take over Sardi’s, of course, but it’s not going to look like Sardi’s by the time we’re done with it. Mr. Sardi is allowing us to turn the whole place into the Chicken Ranch.  Red lights everywhere, heavy drapery on the windows, and we’re gonna bring over furniture from the show.  Real set pieces!  We’re even asking the waitstaff to drench themselves in perfume. It’s gonna be an experience!”  He made it seem like these plans were already in the works, but I had a keen sense he was making it all up on the spot. Well, my editor went nutso for this item.  I never made it to that opening night, but I like to imagine that it was just as he described it.

Tommy and I became fast friends after that, and I’ve seen everything he’s ever done.  He is one of those rare true theatrical geniuses, who just sees the world differently than the rest of us mere mortals.  In fact, I can’t count the number of shows during which I’ve said to myself at some point, “If only Tommy had been brought on to fix this mess we’d all be having a much better time.”  I think it’s high time we had another Tommy Tune production on Broadway.  The last time I saw him, we were up in Boston for the reopening of the Colonial Theatre, and he was reminiscing about Grand Hotel.  I remember saying to him at the time, “How about a revival?”  He just looked off into the distance and smiled — imagining, no doubt, how a new production of that gem might look or sound or move.

Now, as much as I adore Tommy, I know that I’m not his number one favorite columnist — that spot is forever reserved for the late Liz Smith, a fellow Texan with whom he shared a very special bond. I like to think I’m a distant second.

To this day I buy him a brand new pair of cowboy boots ever year on his birthday.  This year’s pair I had hand painted to look like they were made from oak wood — the traditional material for celebrating an 80th.  I’ve already let the boot-maker know I’m going to need him to whip up a pair that look like they’ve been cut from marble — that’s what you give on a 90th.

Caught Ron Rifkin picking up a bottle of Pernod at Astor Wines.  “That for cooking or drinking, Ron?”  “Wouldn’t you like to know!”

Overheard Kim Fields ask Anderson Cooper from across the room at Gabriel’s if he had any inside dish on the Mueller report.  He didn’t. 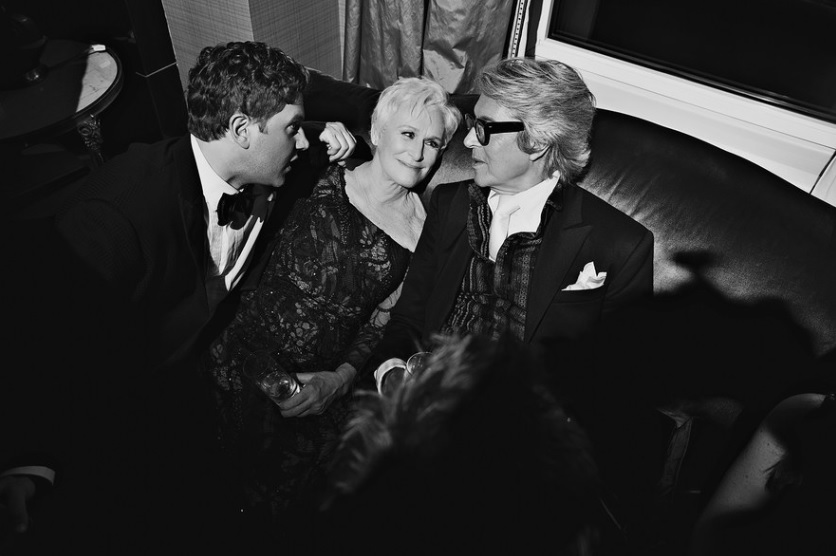