“As If We Never Said Goodbye”

Did you ever have that feeling that life’s repeating itself? What’s that called? Deja vu, no? Yes. Deja vu. Well that’s exactly what I felt last Thursday at the opening night of Sunset Boulevard. Andrew Lloyd Webber and his gorgeous wife Madeleine greeting guests in the back of the theater. The pit musicians tuning up for the overture. Glenn Close about to take the stage in the role she was born to play (a woman with an even more fatal attraction). Had I been here before? Indeed I had….

1993, The Shubert Theatre in Los Angeles. A flurry of stars, including Ron and Nancy Reagan and the cast of the hottest show on TV, “Melrose Place.” The curtain call lasted an eternity. At the after party we all dined on chicken pot pies (Glenn’s request, I was told).

Now, flash forward a couple of decades and change. Swap out the Shubert for the Palace. Swap out L.A. for New York. Swap out Ron and Nancy Reagan for Joel Grey and Bernadette Peters and the cast of “Melrose Place” for lots and lots of “Real Housewives” and Neil Patrick Harris. And swap out those chicken pot pies for potstickers.

Producers Paul Blake and Mike Bosner threw a party for the ages, and Glenn, Andrew, and Madeline entertained their guests until the wee hours.

Pay no mind to the morale of the story — show biz glamour never fades!

And with the opening of Sunset, the sun rises on a new era for Broadway’s most successful composer: Lord Lloyd Webber now has four shows running on Broadway — each one a hit (one of them the biggest hit in theater history). Has this been done before? Yes, once. By a couple of no-name schleppers named Rodgers and Hammerstein. Now they finally have some company.

Tidbits from the West Coast, in Honor of Sunset Boulevard

Saw the cast of “This Is Us” dressed to the nines and dining out at “Faith & Flower” in downtown Los Angeles.

Overheard Peter Asher and LeAnn Rimes saying “I’m such a fan!” to each other at the exact same time, at the 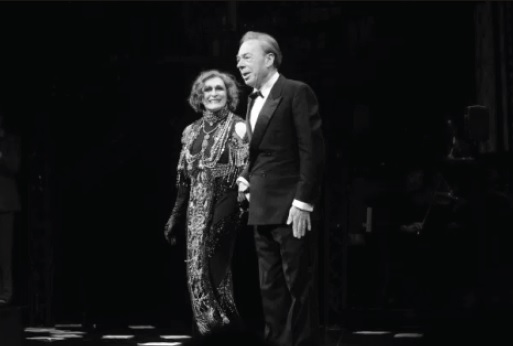