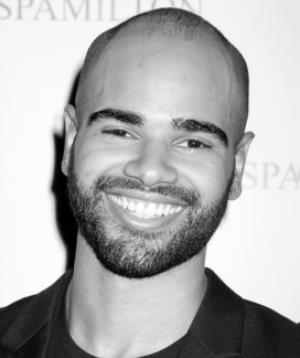 When there’s a revolution on Broadway, it’s only appropriate that the revolutionary mind behind Forbidden Broadway spoofs it. And for that, you need a killer cast. Nicholas Edwards is one of an ensemble of comic geniuses in Spamilton – the hit Hamilton parody at the Triad. Nicholas gives a Tony-worthy performance as this year’s Tony-winning Daveed Diggs and brings the house down with his undeniable portrayal of Daveed’s characters combined with a unique comedic bent. This talented up-and-comer has also appeared in Kander and Ebb’s Kiss of the Spider Woman and the international tour of Sister Act. He’s making every room a room where it happens and we’re thrilled to have him in ours, On the Couch.

I try to have a positive outlook on everything… so my positivity! LOL

Besides my mom’s Dominican cooking, pad thai- hands down. Can you tell I spent a lot of time in Asia?

I dip everything in RANCH.

Playing through all the Zelda remakes! It’s how I wind down after a show.

I drink wayyyyy too much coffee.

To originate a role. Any role. Doesn’t matter where.

Trying to beat any Zelda dungeon without a walkthrough. That and YouTube. It’s a close tie.

My sweet tooth. I put away pints of Ben and Jerry’s like you wouldn’t believe.

My mom was a business woman and as a kid I would love pretending to be her “assistant”. I learned a lot from her work ethic- she never settles.

RUNNING LATE TO EVERYTHING!

Snapchat filters. Even though I’m guilty of using them myself….

Akihabara district in Tokyo. Tokyo’s electronic/anime town. You wouldn’t believe the gadgets you can find there. Also, anime inspired J-Pop is something to get excited about.

Someone who is driven and confident in themselves. Good communication also helps.

Since I’m highly allergic to cats and because cats are really creepy… dogs. I have a Bichon Frise who lives at home with mom. His name is Diz (short for Disney) and he’s 14 years old!

I think once the “best day of our lives” happens, we’re going to be constantly searching for the next best day ever… but if I had to choose it would have to be if my agent called me to tell me I booked a lead on Broadway. Or maybe if I won a lifetime supply of Americone Dream Ben and Jerry’s.

Do everything with pride. Make it your own and leave your mark.