With politics (sexual and otherwise) as troubling as ever, I was mercifully buoyed this week by news that one of America’s most glorious edifices is being brought back to life.  Boston’s storied Colonial Theatre is getting a new lease on life (literally) courtesy of a newly formed partnership between Emerson College and Ambassador Theatre Group.

This isn’t just any old theater, mind you.  This is where I saw Madeline Kahn and Imogene Coca in On the Twentieth Century before the show came to Broadway (and Kahn got canned).  This is where a frazzled Stephen Sondheim frantically wrote “Send in the Clowns” for Glynis Johns.  This is where George Hearn first belted “I Am What I Am” in front of a paying audience, while Harvey Fierstein and Allan Carr quietly wept in the last row.

It’s quite a legacy to live up to, and so along with the announcement of ATG’s take-over came the news that the Colonial would be hosting the world premiere of the stage adaptation of Baz Luhrmann’s Moulin Rouge.  I’ll be there to report on all the history in the making.

My spirits were lifted even higher at the first preview of the new Broadway comedy Meteor Shower.  Let’s take a moment to examine this one.  You’ve got a play by Steve Martin.  You’ve got direction by Jerry Zaks.  You’ve got a cast that features Amy Schumer, Keegan-Michael Key, Laura Benanti, and Jeremy Shamos.  So, feel free to check my math, but I’m pretty sure the equation is:

After the show, I crashed a bash at Rum House – the Times Square watering hole immortalized in Birdman – where I anesthetized in a flammable tropical punch while watching the Dodgers lose the Series.  I’ve been a die-hard Dodgers fan since my days at the Herald-Examiner.  In those days, Herald-Examiner press credentials afforded one access to all areas of Dodger Stadium – including the locker room.  If you saw what I saw you’d be a fan too!

Spotted New York’s most accomplished aesthete, Sam Shahid, signing copies of his gorgeous new book, And the Band Was Playing a Gay Tune at the New York Edition, while his buddyJoel Grey held court at a nearby table.

And, finally, a heartfelt congrats to everyone involved in The Lion King, which is celebrating an astonishing 20 years on Broadway.  When I first heard Disney topper Tom Schumacher had hired Julie Taymor – then best known for Balinese puppetry and Shakespeare – to direct, I thought he was out of his mind.  Then they created the most successful musical in history.  Twenty years on, it’s still drawing massive crowds on Broadway and around the globe, and turning its audiences into lifelong theater fans in the process. 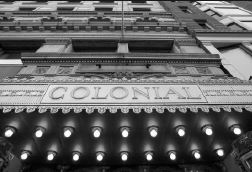