“On the Sunny Side of the Street”

I’ve begun to consider Ruben and Isabel Toledos’ midtown atelier as my home away from home. In full disclosure, I’ve only been there twice, but the Toledo’s are such gracious hosts that it’s impossible not to feel at home. The reason for my most recent visit was a soiree celebrating k.d. lang‘s first performance in After Midnight. Upon entering the bi-level space, a table of cocktails greeted me. A fizzy tequila-based cocktail with the essence of lime and cucumber was my drink of choice, and I had more than I care to admit. The lights of the Empire State Building gleamed through just about every massive window — some attendees braved the cold to get a closer view from the “smoking terrace.” The crowd was as chic as the environs, natch. Candy Spelling, Beth Grant, Joe Jackson, Agnus Gund, Rachel Antonoff, John Douglas Thompson, David Rockwell, Taylor Negron, Cecilia Dean, and a slew of other well-heeled (literally) New Yorkers whom looked vaguely familiar and whom a younger columnist could surely identify, were all on hand with cocktails in hand.

When the clock struck 7:00 p.m. we were all escorted into a caravan of black town cars and shuttled to the Brooks Atkinson Theatre to see ms. lang “lose her Broadway virginity,” as producer Scott Sanders put it (heretofore she had never even seen a Broadway show, let alone starred in one). And what a deflowering it was! She tore the roof of the joint in androgynous white tuxedos, courtesy of Isabel Toledo at her gender-bending best! The likes of Tony Bennett, Rosie O’Donnell, and the show’s co-creator Wynton Marsalis were all seated nearby.

After the show, a crowd of fans crowded near the foot of the stage and waiting until ms. lang graced them with her presence one last time. She spent nearly thirty minutes meeting and greeting fans from all over the world, while Mr. Sanders, Mr. Marsalis, Mr. Bennett, Ms. Spelling, and other guests waited patiently to fete her at a thirty-top at Bond 45. When she finally did enter the eatery, she was met with yet another standing ovation. I can’t think of a more significant Broadway debut since I Can Get It For You Wholesale!

Overheard everyone in New York complaining about the weather. 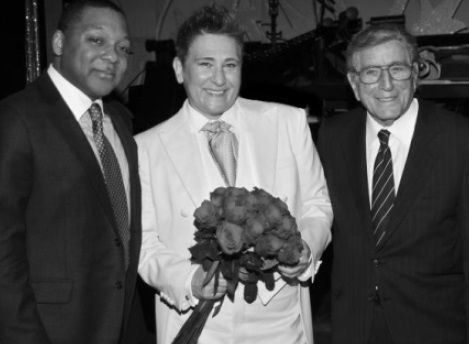