“One Hand, One Heart”

Joel Grey and the cast of ‘The Normal Heart’ cheer on playwright Larry Kramer on stage.

On Tuesday night, Joel Grey delivered one of the most memorable nights in recent Broadway memory with his 25th Anniversary benefit staged reading of Larry Kramer’s The Normal Heart. Daryl Roth produced the evening as a benefit for The Actors Fund and Friends In Deed. The venue was the gorgeous Walter Kerr Theatre, generously lent out for the evening by Jujamcyn Theaters. Jujamcyn prez Jordan Roth took his seat just as the lights dimmed, as he was coming from another high profile event in one of his venues: the Michelle Obama fundraiser at the St. James that all but shut down West 44th Street.

The all star cast boasted Joe Mantello, Glenn Close, Victor Garber, Jason Butler Harner, John Benjamin Hickey, Jack McBrayer, Michael Stuhlbarg, Patrick Wilson, Michael Cerveris and Santino Fontana. The production (which was so much more than a “staged reading”) highlighted the play’s relevancy, making the play as devastating as ever. It also highlighted the play’s intense (and ample) humor, which so often gets overlooked. The cast was as great as you’d expect. Mantello, in the central role, showed such natural stage instincts, he made acting look like the easiest job in the world (we know better). And what a thrill to have Glenn Close back on Broadway where she belongs, if only for one night! It was a thrilling theatrical experience.

After the show, I followed the crowd to Bond 45 for the post-performance fete. Joel Grey was holding court in a corner banquette, while Jack McBrayer escaped from the crush of the press line. Glenn Close shared a warm embrace with Jason Butler Harner, asking him, “Why haven’t you done our show? Well, I know how busy you are.” She was, I can only assume, referring to “Damages” – a show so addictive the FDA should label it a controlled substance. Matthew Broderick and Andy Cohen huddled by the bar, while nearby the notoriously press-shy Joe Mantello dutifully (if begrudgingly) posed for photographers. I slipped out just before 1:00 am, and the cast was still going strong.

What I Did for “Love”

Last week one of my favorite shows, Love, Loss, and What I Wore, celebrated its one-year anniversary. Anyone who thinks that you can’t produce a hit show Off-Broadway in this economy ought to study the methods of producer Daryl Roth. A slew of starry Love, Loss alums came out to celebrate, including Caroline Rhea, Allison Mack, Judy Gold, Sherri Shepherd, Jayne Houdyshell, Didi Conn, Natasha Lyonne, Stacy London, Victoria Clark, Penny Fuller, and Katie Finneran. And, of course, the play’s fabulous co-authors, Nora Ephron and Delia Ephron (the chicest writers in New York City), were on hand, along with the show’s current cast: Erin Dilly, Aisha de Haas, Barbara Feldon, Tovah Feldshuh and Ashley Austin Morris. The big surprise moment came when Daryl Roth presented Dress for Success with a giant check (giant both figuratively and literally: it was the size of a small car and it was for a staggering $125,000). A portion of the production’s proceeds benefit the organization, which provides work clothing and job support for low-income women. This is truly feel-good theater you can feel good about! The other surprise moment came when a drunken party crasher yelled, “Tovah, you remain a hot piece of ass!” to a shocked, but flattered, Ms. Feldshuh. Well, what can you do? It happens to be a fact!

Watched New York Times restaurant critic Sam Sifton enjoying the sounds of John Pizzarelli and Jessica Molaskey over a bowl of lobster bisque from best seat in the house at the Café Carlyle.  I said, “Sam, how did you land this table?” “Talk to Tony,” he replied.

Ran into Harvey Fierstein as he was popping into Promises, Promises, and then again at The Addams Family the following evening.

Overheard Howard Stern sidekick Robin Quivers yelling into her cell phone about the sodium levels of miso soup in midtown.

Saw Patrick Pacheco, Jesse Green, and Michael Riedel fighting so intensely over the check at Centrale that I was worried it might come to blows.

Witnessed Julie Chen fixing a run in her stocking with a little dab of clear nail polish on a bench in Washington Square Park.

Finally, huge congratulations to the press agent formerly known as Leslie Baden, who wedded Sal Papa in a ceremony in Bretton Woods, NH last weekend. I understand they are currently enjoying an extended honeymoon in Hawaii … where I hope she is staying off her blackberry! 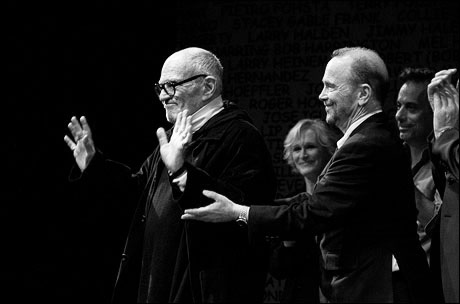