Raise your hand if you were not on the Upper East Side this past Monday evening. Now make a fist with that hand and slam it down on your head as hard as you can seven or eight times in a row. That should approximate the level of irritation that those of us who were trying to get to the Cooper Hewitt Museum to fete double Tony nominee David Rockwell felt while sitting in standstill traffic, waiting for the presidential motorcade to pass. Sitting in traffic is never fun, but knowing that an open bar and passed hors d’oeuvres are waiting for you at your destination, if only these police barricades would open and let you pass, is sheer torture I wouldn’t wish on my worst enemy. I understand that many guests took to the underground, but the last time I decided to brave the MTA I got stuck between stations for forty-five minutes and a crazy lady screamed at me until I finally relented and let her have a sip of my soda. So I dutifully (if not quite patriotically) waited in my air conditioned Town Car.

Finally arriving at Cooper Hewitt, at least thirty minutes past even the loosest definition of “fashionably late,” felt like a warm embrace from a dear friend. Already sipping there circulating were Kristin Chenoweth, Peter Gallagher, and Andy Karl– stars of the Roundabout Theatre’s revival of On the Twentieth Century. Also in attendance were all four tap-dancing porters from that hit show. Why such a large turn-out from Twentieth Century cast? The event was to celebrate the production and, specifically, its Tony-nominated scenic design by David Rockwell (who is also nominated this year in the Best Scenic Design of a Play category for his work on You Can’t Take It With You). The museum’s director, Caroline Baumann, spoke excitingly about the recent renovation of Cooper Hewitt, which is housed rather magnificently in the Andrew Carnegie mansion, and called the evening “a unique intersection of the design world and theater world.” I spotted star of Side Show – another show boasting a Rockwell set, Erin Davie, there in a stunning emerald green number, mingling with the show’s book writer, Bill Russell. (I overheard one guest call the fact that Side Show as overlooked in the Tony nomination process “an absolute perversion!”) I caught up with Joel Grey, who co-directed the Broadway production of The Normal Heart which featured a set by … you guessed it. The guest Mr. Rockwell was most focused on, though, weren’t any of the theater heavyweights or attending media. It was his thirteen year old daughter Lola, who lit up the room and mingled with the adults like a pro.

In addition to the two nominations, Rockwell is also celebrating the 30th Anniversary of his architecture and design firm, The Rockwell Group.

Tidbits from around town….

Spotted Michael J. Fox and Jonathan Groff at a recent performance of Hand to God.

Overheard Something Rotten star Brian d’Arcy James cheering up a little girl who had dropped her ice cream cone on 44th Street.

Watched Lynda Carter get honored by United Cerebral Palsy of NYC this week at their Women Who Care Awards luncheon at Cipriani 42nd Street. Congratulations to a real life Wonder Woman! 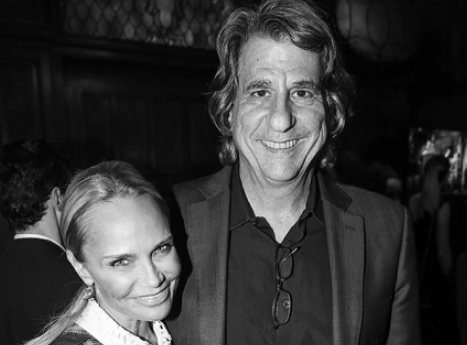