“OUT OF MY DREAMS”

This weekend will see the departure of two of the most provocative Broadway productions of our young century: Jeremy O. Harris’s unabashedly confrontational Slave Play and Daniel Fish’s bold, Tony Award-winning reimagining of Rodgers & Hammerstein’s Oklahoma! I swooned early and often for these theatrical gems, having caught them both in their pre-Broadway runs (St. Ann’s Warehouse for Oklahoma!; New York Theatre Workshop for Slave Play). I’ll be sitting shiva all weekend; don’t bother calling.

Last week, Oklahoma!’s Damon Daunno, who found himself with a 2019 Tony Award nomination for his sparkling turn as Curly, joined the ranks of the theatrical elite as his Sardi’s portrait was unveiled in a special ceremony. Hilary Hawke, from the show’s band, plucked out a rendition of “Oh, What a Beautiful Mornin” on her banjo just before the veil was lifted on Daunno’s likeness. I found myself bragging about the six performances I’d attended to exactly the wrong person: a superfan named Tricia (she calls herself an “Okla-homie”) who had seen the show a total of 80 times. I told her I hoped she had either a great job or rich parents!

In addition to wowing audiences nightly, Oklahoma! has also been donating a percentage of its box office take to the Gun Neutral Initiative. It won the Tony for Best Revival of a Musical. It made history when star Ali Stroker became the first actor who uses a wheelchair to win a Tony Award. It even earned a special honor from the state of Oklahoma. Unfortunately, I can’t make it to the final performance on Sunday. Tricia will have to fill me in on how it went.

As for Slave Play, I couldn’t help but feel prodded, poked, and examined the first time I attended. As the white half of many an interracial relationship over the years, it felt like the playwright tore out my guts and strew them all over the stage. And I adored every minute! I wasn’t surprised when it transferred to Broadway. I was even less surprised when it became the most talked about show of the fall and the see-and-be-seen event for the woke set. A-listers, including Cate Blanchett, Anne Hathaway, Donald Glover, Tyler Perry, Hugh Jackman, Natasha Lyonne, Chloë Sevigny, Cindy Crawford, Lin-Manuel Miranda, Lucy Hale, Rachel Zegler, Owen Wilson, and Louis C.K., were drawn like moths to a flame. On two evenings, in what marketing guru Len Gill would call the ultimate “BFO” (translation: “Biggest, First, Only”), the show played to an exclusively black audience.

Finally, a shout out to my pals, the producers of these productions – for Oklahoma!, the indefatigable Eva Price; and for Slave Play, the intrepid folks at Seaview Productions, Greg Nobile, Jana Shea and Carly Callahan. Their legacies will be richly rewarded with these works.

Come Monday, Broadway will still be Broadway — but a significantly less daring version of itself. At least until Jeremy O. Harris or Daniel Fish, or whichever visionary artist is on deck, makes their next show.

Caught Maggie Gyllenhaal closing her overcoat in a taxi door on Mercer.

Witnessed “Cheer” breakout star, “Coach” Monica Aldama, checking into the St. Regis.  No one got injured.

Caught rock lore idol, May Pang, in deep conversation about the West Side Story revival with producer Suzi Dietz and former LA Weekly editrix, Joie Davidow, at the opening night party for Miss America’s Ugly Daughter at the UWS YMCA. 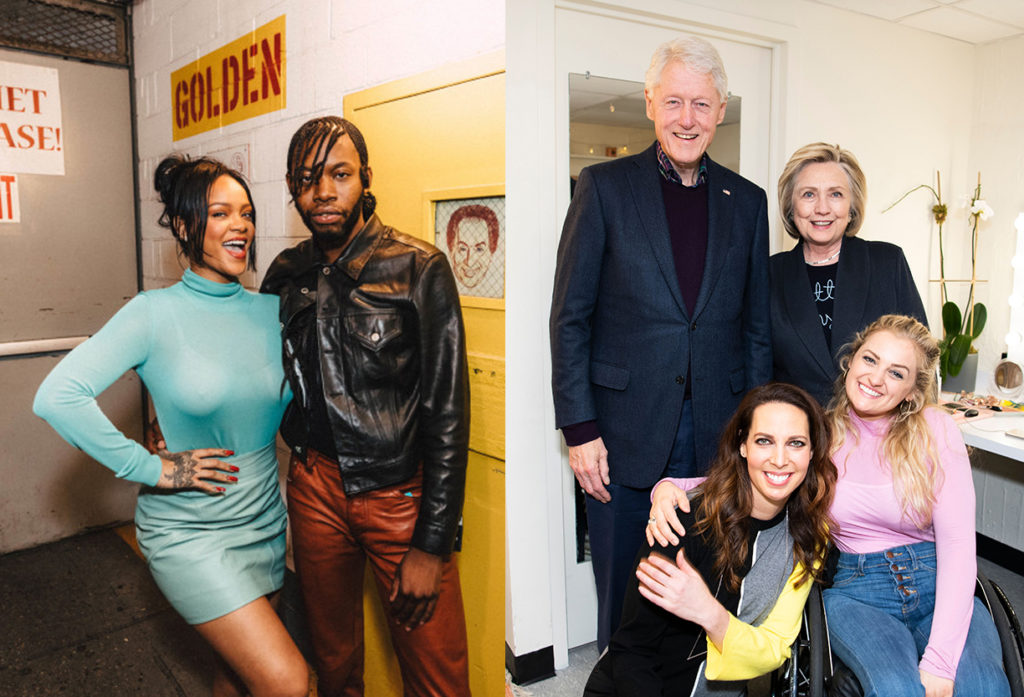