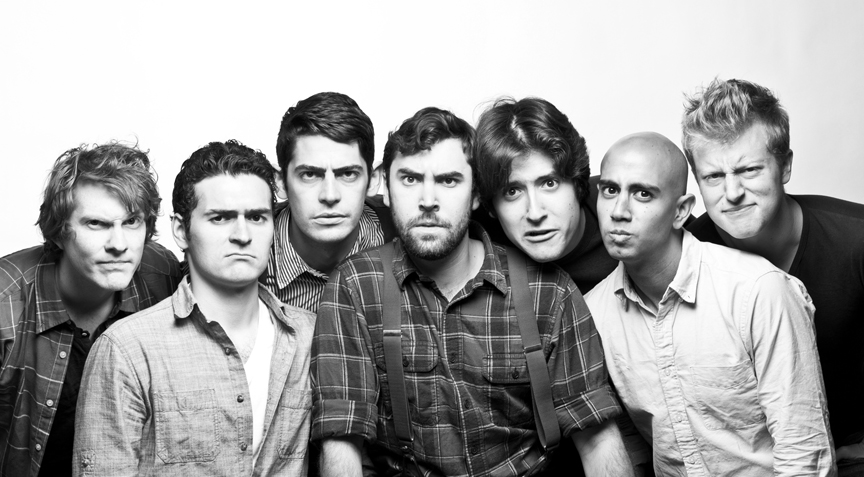 One of the hottest young troupes to hit New York City in many a moon, PigPen Theatre Co. was formed in 2008 at Carnegie Mellon University. The 7-member company is the only group to have won the New York Fringe Festival Overall Excellence Award two years in a row (2010, 2011). Beginning September 26, they make their highly anticipated Off-Broadway debut with their newest creation, The Old Man and The Old Moon, playing at the Gym at Judson as the inaugural offering of the SoHo Playhouse Inc. season. Checkout what gets these dudes’ creative juices flowing as we get them On The Couch!


Q: What do you consider to be your best asset?
The sheer number of hours we’ve spent together, both as close friends and collaborators, have helped us create a unique shared vocabulary. Whenever we are writing something new, be it a play, a song, or a character, we try to play into each individual’s strengths. That being said, when big opportunities come up, we push ourselves to step outside our comfort zone. The Old Man and The Old Moon being a perfect example. We are always trying to learn how to be better storytellers. You’ll have to come and tell us how we did.

Q: What was your proudest moment?
The moments immediately following our first performance.  We came at that show with no expectations and driven purely by the desire to create something.  When we saw the way that people reacted to it, we could look at it from the outside for the first time and say “Wow.  We made something that we love doing and people love watching and we did it together.”  That was a proud moment.  And it has driven us to do all of the work we've done since that first show almost six years ago.

Q: What is your favorite drink?
Coffee.  That's probably the favorite drink of any young theater company.  Necessity is the mother of caffeine-ation.

Q: What is your favorite food?
Three-Alarm Deli in Queens. It's basically a sandwich made out of 3 sandwiches.

Q: What is your favorite condiment?
Now you’re just making us hungry.

Q: What is your current obsession?
We have always been obsessed with the summer camp game “Mafia”. We can’t even play it anymore because we all know each other's “tells” too well. We have elaborate and layered cop-townsperson-mafia strategies. Friendships have been forged and broken on the unforgiving anvil of mafia.  And so it must be.

Q: If you could give up one of your vices, what would it be?
Playing on a familiar motif, it would have to be Dunkin’ Donuts. Iced coffee and blueberry cake doughnuts have stolen more rehearsal time from us than we’d care to admit.

Q: What is the one professional accomplishment you long for most?
The Triple Crown. In horse racing.

Q: What is the one thing you waste too much money on?
We are single-handedly keeping the Gorilla Tape company in business. Seriously, if anyone knows the folks at Gorilla Tape, we are looking for sponsorship.

Q: What is the one activity you waste too much time doing?
Looking for alternate methods to attach cardboard to canvas. We should seriously know by now, it’s always going to be Gorilla Tape. Every time.

Q: What do you consider to be the single greatest threat to your health?
Eek, that’s morbid. Probably some kind of disease. What’s going around these days?

Q: What is the single best trait you inherited or learned from your parents?
They told us anything is possible.

Q: What is the single worst trait you inherited or learned from your parents?
They told us anything is possible.

Q: What in the world most thrills you?
There's nothing more thrilling than opening night of the show you and your best friends have spent every waking hour of the last six months writing, directing, designing, producing, composing and finally performing in.  Maybe jet-skiing.

Q: What current trend in popular culture most irritates you?
For a while there was this strange folk-band-puppet-storytelling-troupe thing happening. We think we missed our window.

Q: What was the single most embarrassing moment you've ever experienced on the job?
Most of what we do would probably be considered embarrassing to your average well-adjusted adult.  Occupational hazard.

Q: What is your favorite place in the world?
Martha’s Vineyard has been very kind to us. So has Carnegie Mellon University. Anywhere where artists are taken care of and the schedule is cleared with one purpose in mind: to create.

Q: What is the most important trait you seek in a romantic partner?
That they are not a member of PigPen.

Q: Do you prefer the company of dogs or cats?
Last time we took a vote, it was five for dogs and two for cats. But campaign season is just picking up now. Stay tuned.

Q: What would have to happen to make today the best day of your life?
Probably a written interview. Oh… my… It’s happening. This. Is. IT.

Q: What is your personal motto?
“Guys, we really need to write a motto.”